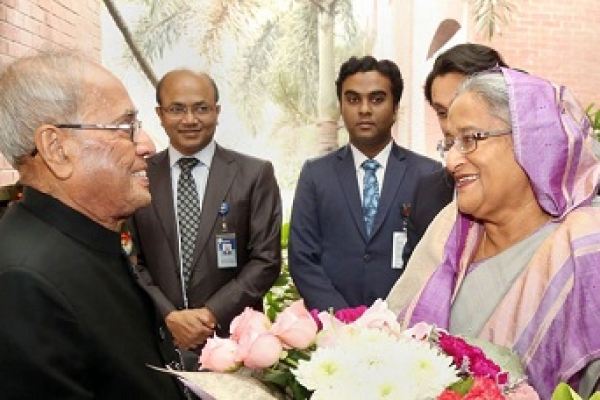 Pranab Mukherjee's appreciation came when he paid a courtesy call on Prime Minister Sheikh Hasina at her official residence Ganabhaban here this afternoon.

At the outset of the meeting, Karim said, the two leaders exchanged wellbeing.

Pranab Mukherjee narrated his retired life, saying he is now passing his time by reading books.

"I did politics for a long time ... I was in a constitutional post as the Indian president and also in parliament. After retirement, I've enough time to read," he said.

The prime minister highlighted Bangladesh's socioeconomic development, saying that poverty rate has been brought down to 22 percent for various pragmatic steps taken by her government.

She said the country's economy counted losses to some extent due to the last year's flood.

About Rohingya issue, Sheikh Hasina said Bangladesh has given shelter to over 10 lakh forcibly evicted Myanmar nationals on a humanitarian ground.

Later, the former Indian president joined a luncheon hosted by the premier.