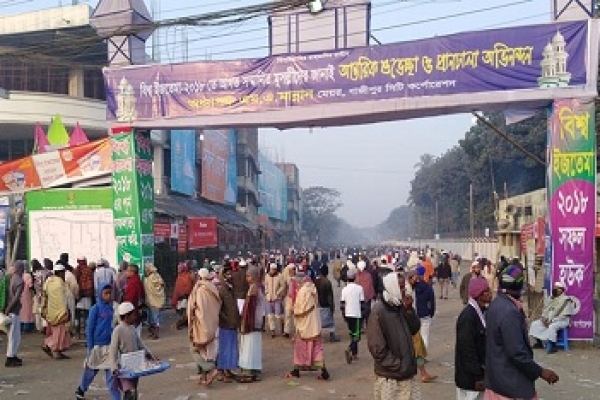 The second phase of 53rd Biswa Ijtema, the second largest congregation of the Muslims, began on Friday morning on the bank of the Turag River at Tongi on the outskirts of the city amid tight security.

The three-day Ijtema began with 'Aam Bayan' (general sermons) by noted scholars after Fazr prayers that will end with Akheri Munajat (final prayers) on January 21.

Thousands of devotees from home and abroad started to throng the Ijtema ground on the bank of the Turag since Wednesday night to take part in the religious event seeking divine blessings of the Almighty Allah.

3.54 lakh gallons of fresh water will be supplied everyday through 18.50 kilometer pipelines from 13 deep tube-wells and 21 trucks will be engaged in removing garbage from the Ijtema ground.

A seven-tier security measure has been taken with deployment of 7,000 policemen and about 250 RAB members to avert any untoward incident during the Ijtema.

According to the sources, 15 watch towers and 41 close circuit camera televisions have been set up in and around the Ijtema ground alongside deployment of bomb disposal units and dog squads to ensure foolproof security of the Biswa Ijtema.

Fifty medical teams and 14 ambulances will provide health care services to the devotees during the three-day congregation.

The first phase of the Ijtema was held from January 13-15 at the same venue.

Tablig Jamaat has been organizing the Ijtema at this venue since 1967. However, the Ijtema is held in two phases since 2011 to ease the accommodation problem.