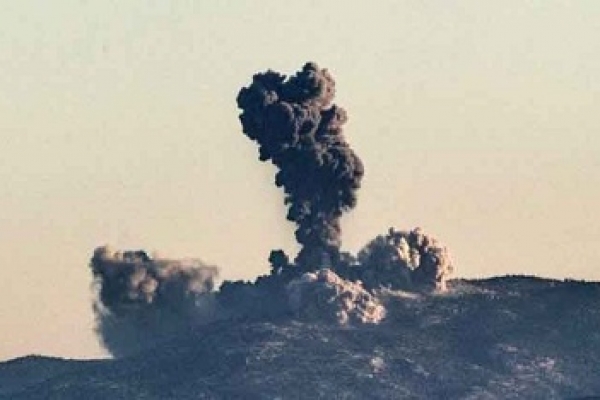 Turkish war planes have launched air strikes on Kurdish fighters in northern Syria in a move likely to raise tensions with the US, reports BBC on Sunday.

Turkey wants to oust the YPG militia, which it calls a terrorist group, from Afrin region on its southern border.

The US-backed YPG says at least nine people were killed in the air strikes.

Russia has moved its troops away from Afrin, saying it is concerned but will not interfere. Syria denounced Turkey's "aggression" and "brutal attack".

Turkey had been shelling the area for two days, ahead of its declaration of a military operation on Saturday.

Turkish Foreign Minister Mevlut Cavusoglu says Turkey has notified all parties involved - including the Syrian government - about the offensive. Syria denied this was the case.

On Saturday, Turkey announced that an air and ground campaign, dubbed "Olive Branch", had been launched at 14:00 GMT, targeting the Kurdish YPG (Syrian Kurdish People's Protection Units) and Islamic State (IS) group jihadists.

The operation would be carried out "with respect for Syria's territorial integrity", it added. A later statement said 108 targets belonging to Kurdish militants had been hit.

Pro-Turkey rebels, known as the Free Syrian Army, also began moving into the area, according to the state-run Anadolu news agency.

The YPG said the strikes had killed at least six civilians and three fighters, with another 13 civilians wounded. One of the fighters belonged to the YPG and the other two were from its all-female affiliate, spokesperson Birusk Hasaka said.

Ankara also said there were casualties, but they were all Kurdish militants.

Turkey's military has been shelling the area since Thursday, a move which it said was in response to fire coming from the area.

On Saturday, a spokesperson for the YPG-led Syrian Democratic Forces (SDF) said it would have no choice but to defend itself if attacked.