I want to move taking all with me: PM

I want to move taking all with me: PM 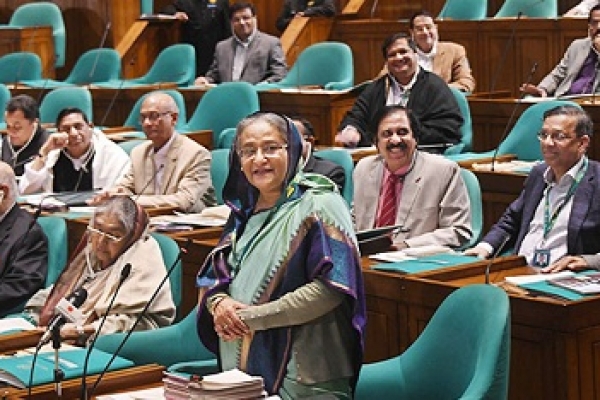 Prime Minister and Leader of the House Sheikh Hasina on Wednesday thanked the people for their wholehearted support to run the country, saying that she always tries to move taking all with her.

"I don't want to move alone ... I always try to advance taking all with me and I'm doing so," she said while replying to a supplementary raised by Jatiya Party lawmaker Fakhrul Imam during her question answer session.

Sheikh Hasina added: "I thank the countrymen as I'm getting all kinds of cooperation from them ... we have been able to develop Bangladesh as we're getting support from them."

The Leader of the House described the achievements of the country as the fruits of the united efforts of all.

She, however, said somebody has to hold the steering like a driver of a car. "One person stays in the driving seat and he or she can reach destination if he or she drives well ... if he or she cannot do it, there is a chance of accident," she said.

"But I don't want to move alone, I want to advance taking all with me," she said.

"We had to hear vulgar and indecent remarks when the BNP-Jamaat was in opposition. But we don't now listen to such comments."

The premier said the rural and grassroots people are now getting the fruits of development and its the aim of the government.