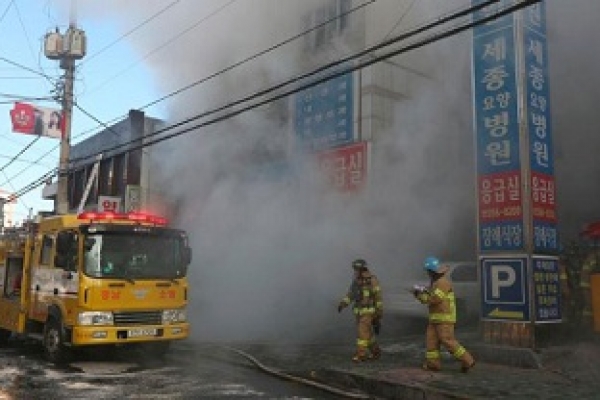 At least 31 people were killed in a blaze at a hospital in South Korea on Friday , authorities said, with 11 more critically injured.

Video footage and pictures showed a helicopter flying above the building in Miryang, engulfed by heavy grey smoke and surrounded by multiple fire trucks.

The national fire agency told AFP that 31 people had been confirmed dead, 11 were in critical condition, and 40 more were injured.

"Two nurses said they had seen fire suddenly erupting in the emergency room," said fire chief Choi Man-Woo, but the cause of the blaze was not immediately known.

All the patients had been evacuated from the hospital and a nursing home in the same building, he added.

"The victims came both from the hospital and the nursing home. Some died on their way to another hospital."

Around 200 people were in the Sejong Hospital building when the fire broke out, police said.
South Korea president Moon Jae-in has convened an emergency staff meeting to discuss the incident.

The fire came only a month after 29 people were killed in an inferno at a fitness club in the South Korean city of Jecheon - a disaster blamed on insufficient emergency exits, flammable finishing materials and illegally parked cars blocking access to emergency vehicles.