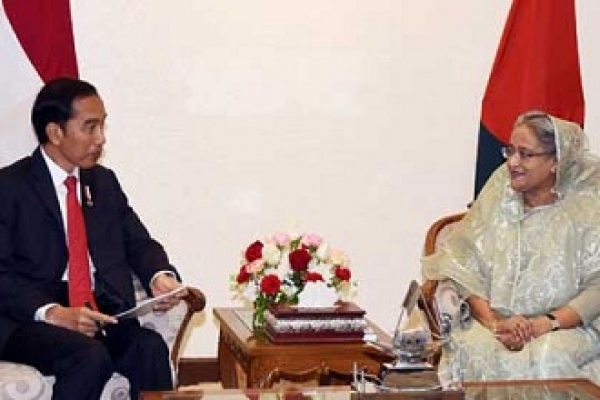 Hasina received Widodo at the Tiger Gate of PM's Office at 9:49am on Sunday and presented him a bouquet.

The two leaders then met privately before beginning official talks.

An agreement on import of Liquified Natural Gas from Indonesia, an MoU on foreign office consultation and a joint communique are among the agreements that may be signed following the talks, reports bdnews24.com.

The Indonesian president arrived in Dhaka on Saturday afternoon on a two-day official visit at the invitation of his Bangladesh counterpart Md Abdul Hamid.

Widodo's official visit began with courtesy call to President Hamid at the Bangabhaban on Saturday evening.

The Indonesian President laid a wreath at the National Memorial in Savar on Sunday morning to pay his respects to the martyrs of the 1971 Liberation War.

Later, he visited the Bangabandhu Memorial Museum in Dhanmondi and placed a wreath at the portrait of Bangabandhu Sheikh Mujibur Rahman.

Widodo will go to Cox's Bazar this afternoon to inspect the camps of Rohingya refugees fleeing violence in Myanmar.

Widodo is scheduled to depart Dhaka at 9am on Monday.