No 3 US diplomat quits in latest departure under Trump

No 3 US diplomat quits in latest departure under Trump 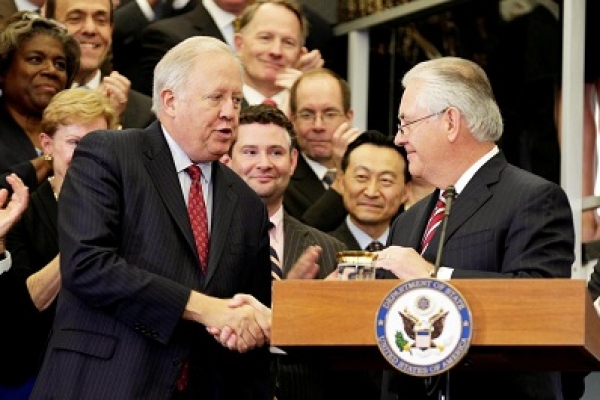 The US State Department’s third-ranking official, Tom Shannon, said on Thursday he was stepping down, the latest senior career diplomat to exit since President Donald Trump took office a year ago.

Shannon, who serves as under secretary of state for political affairs, is the most senior career diplomat at the State Department and has been a fixture among the nation’s diplomatic ranks during more than 34 years of service spanning six presidents and 10 secretaries of state.

In a letter to department staff, Shannon, 60, said he was resigning for personal reasons.

“My decision is personal, and driven by a desire to attend to my family, take stock of my life, and set a new direction for my remaining years,” Shannon wrote in a note to staff after informing Secretary of State Rex Tillerson on Wednesday of his decision to retire.

Shannon worked recently on some of the most complex and sensitive issues, including Iran’s compliance with the landmark nuclear deal and Washington’s fraught relations with Russia.

His departure is part of a steady stream of senior career diplomats who have left since Trump became president. It will deprive the State Department of a seasoned veteran at a time when the United States is grappling with crises on several fronts, most notably North Korea’s nuclear threat.

Shannon’s calm demeanor, language skills and decades of experience made him a frequent choice for some of the thorniest assignments.

Addressing students at Duke University in Durham, North Carolina, hours after his retirement was announced, Shannon emphasized he was not stepping down for political reasons.

“Events in my own life have taught me that while I was blessed in many ways, one thing I don’t have enough of right now is time,” he told students.

He acknowledged that political transitions in Washington were difficult for career civil servants, but said the number of those at the State Department who had left for political reasons was “quite small.”

He added: “Which doesn’t mean that we haven’t been hurt by the loss of some of our officers. We certainly have.”

Shannon represented the United States at the inauguration of Liberia’s new president, George Weah, shortly after reported remarks by Trump that immigrants from Africa and Haiti come from “shithole” countries.