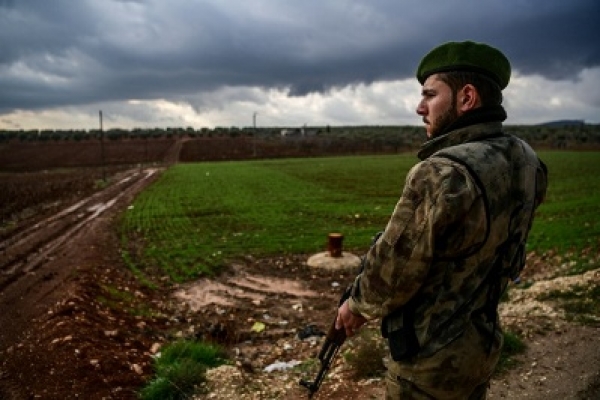 Seven Turkish soldiers were killed Saturday in Turkey's offensive against Kurdish militia inside Syria, including five who died in a single attack on a tank, the army said.

The losses marked the highest toll in one day for the Turkish military in operation "Olive Branch", launched on January 20 against Syrian Kurdish People's Protection Units (YPG) militia seen by Ankara as a terror group.

The attack on the tank, details of which were not disclosed, was also the single deadliest attack on the military of the offensive so far.

The latest clashes brought to 14 the number of Turkish troops killed so far in operation.

The Turkish army and allied Ankara-backed Syrian rebel forces are seeking to oust the YPG from its western border stronghold of Afrin but the operation so far has been marked by fierce clashes.

The army said that one of the soldiers was killed in a clash and another on the border area, without giving further details.

In a later statement, it added a Turkish army tank had been hit in another attack, killing all five servicemen inside.

A previous statement said one serviceman was killed and another wounded in that attack.

In retaliation, Turkish war planes carried out air strikes on the area from where the attack was carried out, destroying shelters and munitions dumps, it added.

President Recep Tayyip Erdogan said on Thursday the Turkish army and Ankara-backed rebels had suffered 25 fatalities between them in the operation so far.

Meanwhile, seven civilians have been killed in mortar fire on the Turkish side of the border that Ankara blames on the YPG.

Ankara says that major progress has been made in the 15-day operation, with almost 900 YPG fighters killed so far although it is not possible to verify these figures.

Erdogan on Saturday sought to reassure France's Emmanuel Macron over the operation, telling the French leader it was aimed against "terror elements" and that Ankara had no eye on Syrian territory.

Macron had incensed Turkish officials by saying in a newspaper interview last week that France would have a "real problem" with the campaign if it turned out to be an "invasion operation".

During the phone call, "the two presidents agreed to work on a diplomatic roadmap in Syria in the coming weeks", the Elysee Palace said in a statement.

Erdogan said in a speech Saturday that the Turkish forces were beginning to take mountain positions and would now head towards Afrin itself. "There is not much to go," he said.

Erdogan's spokesman Ibrahim Kalin meanwhile told journalists in Istanbul that the operation was going as planned but there was no timetable for its duration and it would "continue until we clear all those areas".

But analysts and monitors say Turkey so far has taken control of limited clumps of territory around the border without yet approaching Afrin town.

Turkey says the YPG is an offshoot of the outlawed Kurdistan Workers' Party (PKK) which has waged a three-decade insurgency against the Turkish state.

However, the YPG has been working closely with the United States to fight the Islamic State extremist group in Syria.

The offensive by Washington's fellow NATO member Ankara on a US-allied force has even raised fears of a military confrontation between two alliance powers.