Muslims should go to Pakistan or Bangladesh: Indian MP

Muslims should go to Pakistan or Bangladesh: Indian MP 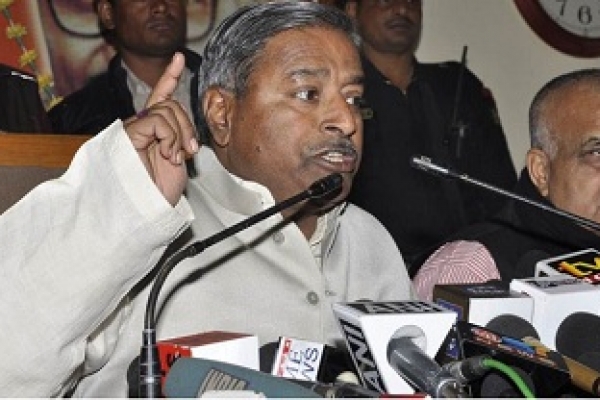 A member of the parliament for the ruling Bharatiya Janata Party (BJP) of India Vinay Katiyar said on Wednesday that “Muslims should not even be living in this country, they should go to Pakistan or Bangladesh”, reported ANI.

Katiyar, who founded the Vishwa Hindu Parishad’s (VHP) youth wing, Bajrang Dal, further said a bill should be introduced in Parliament that frames a punishment for those “who do not respect Vande Mataram, (and) those who insult the national flag.”

Katiyar’s comment was a response to AIMIM president Asaduddin Owaisi demanded the framing of a law to punish anyone who calls an Indian Muslim a “Pakistani”.

Without referring to Owaisi, Katiyar further said that “Muslims partitioned the country” on religious lines.

“Muslims shouldn’t even be living in this country, they’re the ones who partitioned this country based on their population, so why do they need to live here? They were given separate territory, they should go to Pakistan or Bangladesh, what business do they have here,” said Katiyar.

“Even after 70 years I am called a Pakistani. Why? We rejected (Pakistan founder Mohammad ALi) Jinnah’s invitation. Now I can’t even hoist the tricolour at free will. Why can’t there be a law just like those that apply to SC/STs?” asked Owaisi, according to Times Now.

Owasi’s comments came days after Bareilly's district magistrate (DM) questioned the “trend” of “entering Muslim localities by force+ , raising anti-Pakistan slogans and then creating a ruckus". The DM, Raghvendra Vikram Singh, was speaking in the context of the religious violence in Uttar Pradesh's Kasganj that began January 26.

“A very strange trend has started of late. Take out processions by force through Muslim dominated localities and raise anti-Pakistan slogans. Why? Are these people Pakistani? The same thing had happened in Khailam village of Bareilly. Then stones were pelted, FIRs lodged," wrote Singh in a Facebook post that he later deleted after facing severe criticism.