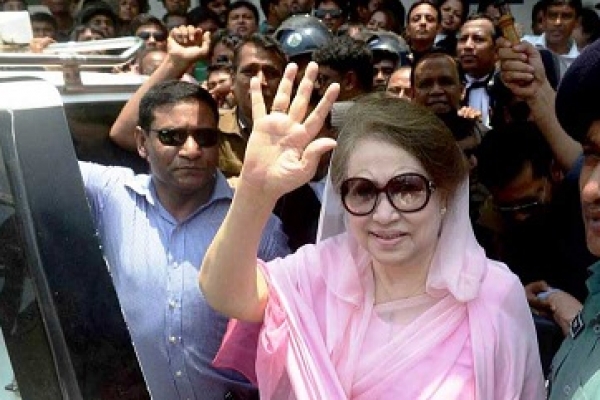 The verdict of Zia Orphanage Trust corruption case against BNP Chairperson Khaleda Zia and her son Tarique Rahman will be delivered today. A deep sense of uncertainty prevails among the common people centring the verdict. Stay connected with the Daily Kalerkantho to get updated.

Two accused in the Zia Orphanage Trust graft case—Kazi Salimul Haque Kamal, and Sharfuddin Ahmed—have been taken to the court premises at Bakshibazar in the capital.

They were taken to the court in a prison van around 9am, our sources have confirmed.

Private TV channel NEWS24, a sister concern of the Daily Kalerkantho, has also reported the news.

BNP Chairperson's advisor Ataur Rahman Dhali has been arrested from the party’s Nayapaltan headquarters in the capital anytime this morning.

Private TV channel NEWS24, a sister concern of the Daily Kalerkantho, has reported the news.

The city dwellers are suffering badly for shortage of public transport and traffic restrictions imposed on some major streets ahead of BNP Chairperson Khaleda Zia’s verdict over graft case today.

Khaleda Zia on Wednesday turned emotional while talking about the loss of her husband, mother and younger son, and said that people are now her relatives.

“I lost my husband in my early life as Ziaur Rahman laid down his life for the country. I also lost my mother when I was there in jail,” she said in a choked voice at her press conference.

The BNP chief could not hold back tears while talking about the demise of her younger son Arafat Rahman Koko. “I’ve lost one of my sons when I was confined to my office…my other son is still receiving treatment abroad after being crippled trough repression.”

Health and Family Welfare Minister Mohammad Nasim yesterday said BNP-Jamaat is out to create an unstable situation in the country over the verdict in Zia Orphanage Trust graft case against BNP Chairperson Begum Khaleda Zia.

"The government has no role in judicial matters. We do not know what verdict will come in the case. If she is convicted, steps will be taken as per the jail code," he told a rally of Dhaka North City Jubo League at Uttara in the city.

The Secondary School Certificate (SSC) and equivalent examinations slated for February 8 will be held as per the previous routine.

A total of 20 Platoons of Border Guard Bangladesh (BGB) have been deployed in the capital yesterday evening ahead of today's verdict against Khaleda Zia'g graft case.

Khaleda Zia called upon the government to hold the next general election in a free, fair and peaceful manner through holding talks.

Addressing the government, she said: "Please shun the path of threat and repression and hold talks."

Inspector General of Police (IGP) Mohammad Jabed Patwary said police with professionalism and legal manner will deal all kind of attempt of anarchy created by any individual or any vested group centering the verdict of the graft case against BNP chairperson Khaleda Zia on Thursday.

Talking to the reporters at the media center of Police Headquarter in the city he, said: “Police will restrict any kind of attempt of creating chaos centering the verdict with an iron hand and will not tolerate it at any cost.”

BNP Chairperson Khaleda Zia said she will not bow down her head as she didn't have any involvement with any kinds of corrupt and unlawful activities.

She said: "I didn't have any involvement with the corruption charges brought against me. I am ready to face any situation as I did nothing wrong."

Alleging that there is no justice in the country now, she further said: "I will be discharged if the court delivers a fair verdict. But, If I am convicted, this will cast a dark shadow on the history of Bangladesh."

BNP Chairperson Khaleda Zia hold a press conference yesterday as a Dhaka court was set to deliver its verdict against her in a graft case on Thursday.

She alleged that there is no justice in the country now as people are being harassed with false charges.

She said: "False charges have been brought against me and my family members and now the verdict on a false graft case will be delivered against me."

Khaleda Zia will be present at the special court during the pronouncement of the verdict on Zia Orphanage Trust graft case against her.

She is set to reach the special court of Judge Akhtaruzzam at 11 am at the Bokshibazar Alia Madrasha ground in the capital, BNP chairperson's lawyer Sanaullah Miah confirmed the information to the journalists.

Security measures have been beefed up across the country including the capital Dhaka centring the verdict of Zia Orphanage Trust corruption case against BNP Chairperson Khaleda Zia.

As part of the security measures, close circuit cameras have been installed at different strategic points across the capital.

The law enforcers have also set up checkpoints at all the entry points of Dhaka to monitor the movement of Dhaka-bound people.

The newly appointed IGP has assured the city dwellers of adequate security.

The members of Border Guard Bangladesh (BGB) have been deployed in six districts yesterday ahead of today’s verdict against Khaleda Zia.

Apart from large-scale arrest, police have started searching vehicles and suspected people while entering the capital as BNP’s preparations are on to stage demonstrations in the city if their chairperson is “unfairly” convicted in a graft case.

A BNP senior leader said they asked their party followers to take position around the makeshift special court set up in Dhaka’s Bakshibazar area from Thursday morning, defying all the obstacles in order to stage a big demonstration if Khaleda is convicted in the Zia Orphanage Trust Graft case.

He, however, said they will prefer getting arrested than getting involved in any clash if the law enforcers obstruct them from registering their protest.

Dhaka Metropolitan Police has slapped a ban on staging rallies and processions and carrying sharp weapons, explosives, and flammable materials in Dhaka on February 8, centering a verdict against Khaleda Zia.

The verdict of Zia Orphanage Trust corruption case against BNP Chairperson Khaleda Zia and her son Tarique Rahman will be delivered on the day.

The restriction will take effect at 4:00am and continue until further notice, said a press notice issued on Tuesday.

Amid the government’s strong preparation to deal with any untoward situation and the ban on any gathering in the city on Thursday, BNP looks firm to stage a massive demonstration if their chairperson is ‘unfairly’ convicted, escalating tensions among city dwellers, including the SSC examinees and their guardians.

However, BNP is unlikely to go for any violent programme like hartal and blockade even if Khaleda Zia is convicted apparently to avoid violence and not to lose public sympathy ahead of the next general election.

At its national executive committee meeting on Saturday last, the party leaders and activists vowed to ensure the peaceful presence of huge number of their leaders and activists on the streets in Dhaka and other parts of the country to register their protest if any injustice is done to Khaleda Zia in the Zia Orphanage Trust Graft case.

Party senior leaders said they will carefully try to avoid any violence and they have asked their party men not to respond to any provocation by ruling party men and law enforcers.

Awami League senior leaders said they will remain alert on the day so that their main rival party activists cannot create any anarchic situation over the court verdict.

The law enforcers have arrested hundreds of leaders and activists of the BNP from across the country from last week.

The members of different law enforcing agencies are conducting the countrywide drives ahead of the verdict in Zia Orphanage Trust graft case against BNP chief Khaleda Zia.

Besides, BNP Joint Secretary General Habib-un-Nabi Khan Sohel has reportedly been arrested from capital’s Malibagh area early Tuesday. However, police said they didn't pick him up.

Moreover, fresh cases filed against scores of BNP-Jamaat members across the country.

The latest mass arrest and detention started last month following an attack on a prison van in the High Court area by the leaders and activists of BNP.

The verdict of Zia Orphanage Trust corruption case against BNP Chairperson Khaleda Zia and her son Tarique Rahman will be delivered on February 8.

Judge Md Akhtaruzzaman of the Special Court-5 in Dhaka fixed the date on January 25 after the defence closed their arguments.