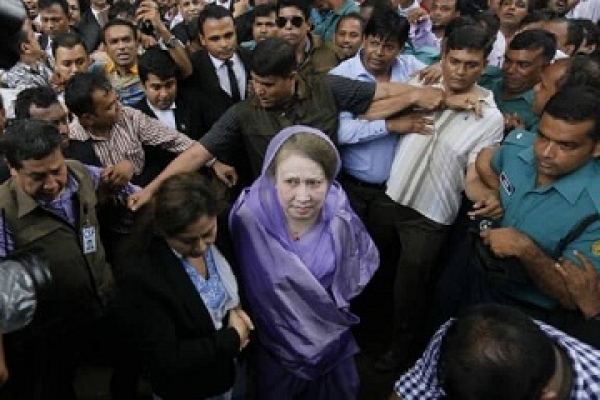 Former prime minister and also the BNP Chairperson, Begum Khaleda Zia, has been taken to the jail after she was convicted in Zia Orphanage Graft Case today.

A special court of Dhaka handed down five years imprisonment to Khaleda Zia and ten years to her son Tariq Rahman and five others in connection with Zia Orphanage graft case.

The court started reading out the summary of the 632-page verdict of Zia Orphanage Trust graft case at 2pm, soon after Khaleda reached the court.

Her motorcade has reached the Old Dhaka’s Bakshibazar area around 1:40pm, our correspondents have reported from the spot.

Earlier, two other accused in the Zia Orphanage Trust graft case—Kazi Salimul Haque Kamal, and Sharfuddin Ahmed— have also been taken to the court premises at Bakshibazar this morning.

They were taken to the court in a prison van around 9:00am, our sources added.

Judge Md Akhtaruzzaman of the Special Court-5 in Dhaka fixed the date on January 25 after the defence closed their arguments.