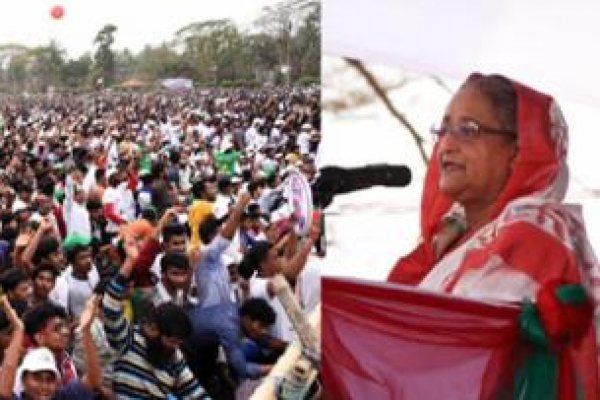 Prime Minister Sheikh Hasina today described BNP chief Khaleda Zia's punishment as natural consequences of her past deeds particularly her role in burning to death innocent people in the name of political campaign in 2013-2015.

"Khaleda Zia looted public property when she was in power . . . she burnt to death over 500 people and injured over 3000 when she was in opposition in an demonstration of extreme brutality," the premier told a public rally at Bangabandhu Udyan of this southwestern coastal city.

Sheikh Hasina added: "The reign of brutality unleashed by Khaleda even shook the throne of the almighty . . . so her conviction was very much natural."

Sheikh Hasina said in 2015 Khleda Zia declared that she would not return home without toppling Awami League government and to make this happen, she opted for brutal violence sitting in her office.

Bangladesh Awami League Barisal District unit organized the rally after she opened a new cantonment in Patuakhali and 39 development projects in Barisal.

Sheikh Hasina said being a political party with its roots among people Awami League always took forward the country and wondered if the foundation laying of 39 projects in Barisal would ever have been possible unless Awami League was not in power.

Sheikh Hasina said her government shouldered the burden of the guardians in purchasing textbooks for their kids in the new academic year.

Children are being given news textbooks on the very first day of their academic session. This year more than 35.42 crore copies of books were given to the children.

Allowances are being given to the 1.30 crore mothers of poor students in addition to scholarships to about 2.03 crore meritorious students from primary to post graduate level from Prime Minister's Trust Fund to pursue their studies.

The government wants to build an enlightened generation to build the future leaders of the nation, she said.

Sheikh Hasina said her government has reached the health service to the peoples doorsteps providing 30 types of medicines free of cost from the union level community health clinics.

She said the Awami League government made the mobile phone available for every people which was a wizard of only rich people during BNP regime.

Sheikh Hasina said around ten lakh people were now abroad with job while 100 economic zones are being established in the country to spur industrial development and create employment opportunities for youths.

"Barisal was once Barisal a neglected region. The present government has embarked on massive development works here. There is now no river in Barisal without having bridges," she said adding that a bridge would be constructed as well to link Barisal with Bhola.

The prime minister said gas will be supplied in Barisal from Bhola through pipeline to develop industries and power plant would be constructed in Bhola.


Urging people to cast their votes for the candidates of Awami League in the next general election, the prime minister said the continuation of the government is crucial for continued development.

"Bangladesh is not a place for looters, militants and terrorists and those who eat up orphans' money," she said.

Bangladesh would celebrate the golden jubilee of its independence in 2021 and Bangabandhu's birth centenary in 2020 as a prosperous nation, she said.

Sheikh Hasina said her government never gave indulgence to the wrongdoers, killers and militants. She urged the guardians, teachers, religious leaders to protect their children from becoming militant or terrorist.

"We have created scope for children to pursue their studies to make them worthy citizens to develop the country," she said adding that Bangladesh would be a country of peace and prosperity.

Sheikh Hasina said her government has resolved the acute power crisis after coming to power in 2009. Now the country has attained the capacity of generating more than 16000 megawatt power, giving 90 percent people access to electricity.

By 2021, the capacity would be 24,000 megawatt bringing all homes under the electricity coverage, she said adding that her government is striving to build a developed country.

The prime minister said her government has materialized the commitment for trial of the war criminals and killers of Bangabandhu and 18 members of his family including minor children and pregnant women. Instead of bringing the killers to book, Ziaur Rahman gave them impunity and rewarded them with foreign posting.

Pointing out the steps taken for welfare of the farmers, the prime minister said around two crore farmers are getting various facilities from the government. Government support, research and constant efforts of the government made the country self-reliant in food production, she said.

The prime minster announced construction of medical colleges in Barisal and other divisional headquarters.