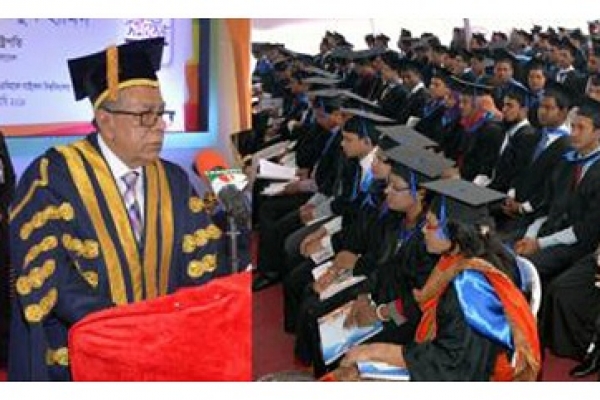 President M Abdul Hamid today urged researchers and scientists to come up with new varieties and methods in agriculture and livestock sectors to offset the adverse impact of climate change and ensure their continued advancement.

"Our agriculture has been exposed to adverse effects of global climate change. . . The use of unplanned chemical fertilizers and pesticides are also affecting country's fisheries and livestock badly," the President said at the first convocation of Chittagong Veterinary and Animal Sciences University (CVASU).

Noting that the specialized universities should play a pioneering role in this regard, President Hamid also asked the authorities concerned to reach the results of research and new invention to the doorstep of the common people as well, reports BSS.

The President asked the university teachers and students to contribute significantly to building a progressive and meritorious nation in wisdom and sciences imbued with the spirit of the Liberation War and patriotism and also ensure sustainable and pro-people development as dreamt by Father of the Nation Bangabandhu Sheikh Mujibur Rahman.

The university authority must perform the task of transforming the youth into well-educated and skilled human resources, Abdul Hamid said, as Bangladesh is now passing through a bright time of possibility.

"We have to make joint efforts to reach education to people's doorstep to make skill human resources and build a Sonar Bangla as envisioned by Bangabandhu," he added.

Terming Bangladesh a role model of development across the globe as it has put a sign of tremendous development in all sides of socio-economic sector, the President said the country in the meantime became a lower-middle income country and would be a middle-income one by 2021."

President Hamid urged the university authorities to take pragmatic steps so that the students can acquire knowledge-based education, do research and various creative activities apart from the academic curriculum.

"The teachers should be more affectionate and like guardians as the friendly relations between students and teachers can play an effective role to maintain a congenial academic atmosphere in varsities," he observed.

The President, also the Chancellor of the university, asked the new graduates to always uphold the dignity of their certificates providing services, honesty, sincerity and patriotism.

"Never bend your head to any misdeed and untruth . . . Don't sell your consciences as you have to make the country's hard-earned Independence more meaningful," the President advised.