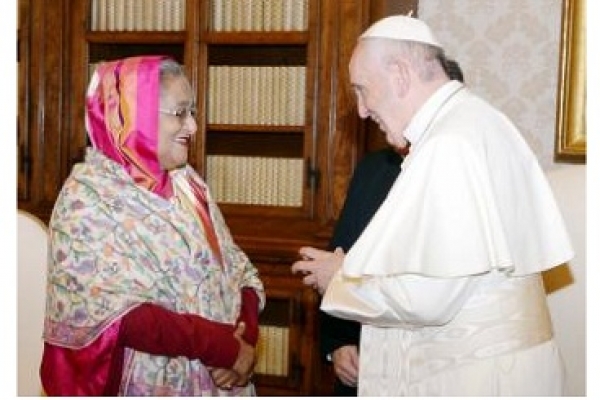 Prime Minister Sheikh Hasina held a meeting with Pope Francis, the spiritual leader of the Catholics of the world, at the Holy See (Vatican City) today.

"The premier visited Vatican City this morning at the invitation of the Pope and had an audience with him there," PM's Press Secretary Ihsanul Karim said.

On her arrival at the Vatican City at 10 am, the prime minister was given a static guard of honour.

Later, the prime minister held the meeting with the Pope at his office in Vatican City.

After the meeting, Sheikh Hasina introduced her entourage members to the Pope.

She also presented a painting on natural beauty of Bangladesh to the Pope who later gave a crest to Sheikh Hasina. The Pope also presented souvenirs to the premier's entourage members.

The premier's meeting with the Pope came two months after the catholic community's top spiritual leader visited Dhaka largely to use his good office in resolving the Rohingya crisis mounting pressures on Myanmar to stop the atrocities and take them back home with dignity.

The Sistine Chapel is a chapel in the Apostolic Palace, the official residence of the Pope, in Vatican City from where he delivers the religious and functionary papal activities.

On the other hand, St. Peter's Basilica is an Italian Renaissance church in Vatican City, the papal enclave within the city of Rome.

Designed principally by Donato Bramante, Michelangelo, Carlo Maderno and Gian Lorenzo Bernini, St. Peter's is the most renowned work of Renaissance architecture and the largest church in the world.

In the evening, World Food Programme Executive Director David Beasley will pay a courtesy call on the prime minister at her hotel in Rome.

Sheikh Hasina arrived here Sunday evening on a four-day official visit to Italy and Vatican City. She will attend the two-day 41st Session of the Governing Council of International Fund for Agricultural Development (IFAD) beginning at the IFAD Headquarters tomorrow morning.

She will present a keynote paper at the inaugural session of the governing council meeting.