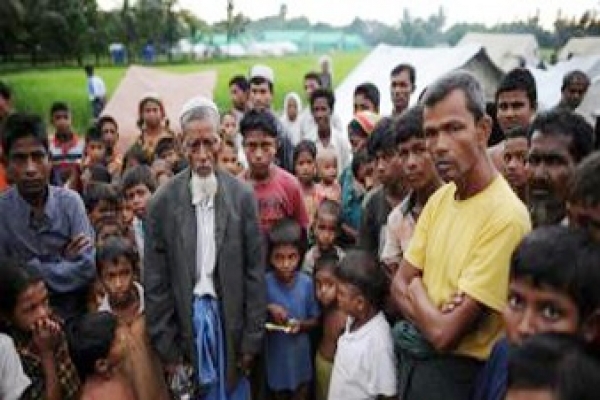 Myanmar yesterday revealed a three-stage plan for return and rehabilitation of its minority Rohingyas who fled their home amid what UN called "ethnic cleansing" as Naypyidaw sent a high level delegation for talks with Bangladesh officials here.

"Myanmar said they planned a three-stage process - taking them (Rohingyas) back, ensuring their livelihood and then awarding them with the nationality," Bangladesh's home minister Asaduzzaman Khan Kamal told a news briefing following a meeting with his counterpart Kyaw Swe.

The two ministers were aided by senior officials in the meeting at the Bangladesh Secretariat as part of the Joint Working Group functions and as a follow up of a 10-point issue over the crisis.

Kamal said Naypyidaw appeared to be sincere in their comments as they acknowledged to the facts involving the situation what Bangladesh side pointed out and "we are getting some confidence they will take their nationals back in line with the Kofi Annan Commission Report".

He, however, said the Bangladesh side repeatedly expressed concerns about the hostile situation in Myanmar's Rakhine state, the scene of atrocities.

"We said unless their safety and food supplies were ensured, the Rohingyas would again come back . . . while the number of these forcibly displaced Myanmar people in Bangladesh now stood at more than a million," Kamal said.

The Bangladesh side, he said, also told the 15-member Myanmar delegation that till now nearly 150 Rohingyas were crossing the border daily while some 6,500 frightened Rohingyas took makeshift refuge on the Myanmar side of the border.

The Bangladesh minister said his counterpart acknowledged the fact and "we planned a meeting on Feb 20 in a bordering Myanmar district to make immediate arrangements at least to return of the Rohingyas languishing on borders".

Dhaka earlier handed over Myanmar a list of Rohingyas and "today gave another list as they sought seeking the names on the basis of the areas they lived in (Rakhine)".

He said the list today contained names of 8,032 Rohingyas belonging to 1600 families.

The Myanmar delegation is on a three-day visit to Dhaka while they met yesterday Bangladesh president Abdul Hamid and apprised him that Naypyidaw was ready to take back Rohingyas under a deal the countries signed late last year.

About 700,000 Rohingya refugees fled their home to take refuge in Bangladesh in the latest and biggest spate of exodus since late August when Myanmar's military launched a security crackdown in northern Rakhine state.

Survivors, UN and the international rights groups said that troops and Buddhist mobs engaged in killings and rapes of Rohingya and set fires that wiped out villages.

The bilateral meeting came three days after UN refugee chief Filippo Grandi told the Security Council that Myanmar was yet to address their exclusion and denial of rights and citizenship while the Rohingyas continued to flee or trying to their home.

Bangladesh launched a clarion call on international community to mount a sustained pressure on Myanmar for safe, dignified and immediate return of the Rohingyas.

Officials and observers feared that the coming monsoon season could aggravate the situation when flooding will also pose a threat and water-borne diseases could become more prevalent.

British Foreign Secretary Boris Johnson, however, met with Myanmar's de facto leader, Aung San Suu Kyi, in the capital Naypyidaw on Sunday to press for action on the Rohingya crisis.