PM for multipurpose use of tea

PM for multipurpose use of tea 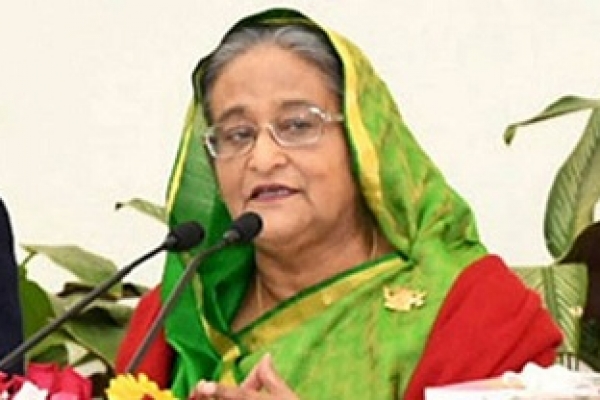 "We can produce soap, shampoo, lotion from tea which are getting huge popularity in the whole world ... we have an enough scope for multipurpose use of the things that remain left after the processing of tea," she said while inaugurating the Bangladesh Tea Expo in city's International Convention City Bashundhara (ICCB) this morning.

She added: "We want Bangladesh's tea to take place in entire globe and be developed further."

In this connection, Sheikh Hasina mentioned that now "satkora tea", "tulsi tea", masala tea and ginger tea are being produced in the country. "The Tea Research Institute is conducting research to produce cola from tea," she said.

The Ministry of Commerce and Bangladesh Tea Board (BTB) is organizing the three-day tea expo with a view to expanding market and promoting tea related-products as well as boosting production with new varieties.

The prime minister urged the researchers to innovate new varieties of tea including drought-tolerant one side by side with boosting its production.

"I hope that our researchers would be able to innovate more developed tea side by side with increasing its production," she said.

Mentioning that she has included tea in her gift items, the prime minister also laid stress on making attractive the packet to keep and present the tea as a gift item. "It will be attractive in foreign countries," she said.

"I've included the tea in my gift item to present it to foreign dignitaries and I would like to tell the tea garden owners that I'm doing advertisement of their tea," she said.

Sheikh Hasina said tea is being produced through organic method by not using chemical fertilizers and pesticides. Green tea and orthodox tea are being produced in tea gardens alongside the CTC black tea, she said.

The prime minister said innovativeness has come in packaging and marketing of tea and different companies are marketing tea in attractive packet, cylinder tea bags.

This value added tea is being exported to different countries at a higher price, she said.

Sheikh Hasina said Bangladesh Tea Research Institute has been carrying out research to raise quality and production of the tea. The institute is conducting research on the flavoured tea and innovating new ways to check pesticides, she said.