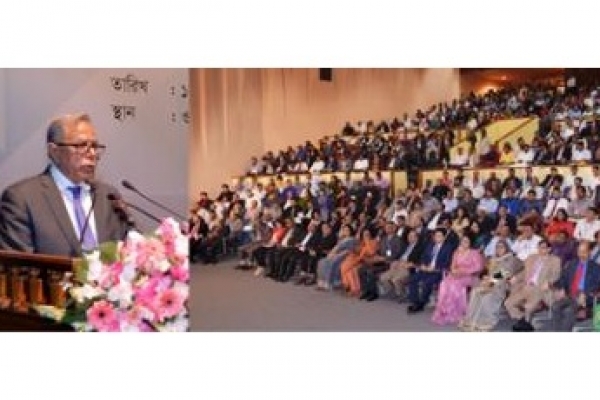 "An independent and free mass-media can help consolidate democracy . . . It can also pay an important role in establishing human rights and rule of law in the country," the President said while addressing an award giving ceremony of Bangladesh Press Council at Osmani Memorial Auditorium here this afternoon.

Noting that freedom of the press, access to information and people's empowerment are interrelated, President Hamid said the responsible role of newspapers and their professionalism can increase awareness through disseminating correct information to the people.

"It's the responsibility of newspapers and journalists to establish a society with equity and justice and help readers to tread the path of truth and welfare by presenting objective news and opinions," Abdul Hamid added.

Referring to the rapid expansion of media houses, including private television channels, FM radio, online radio, online television and community radio, during the time of the incumbent government, the President put emphasis on newsmen's playing a more irresponsible role to reach their positive impact to the doorstep of the people.

"Untrue, provocative or yellow journalism can never be the friends of people and democracy," President Hamid observed.

The President said journalists' objective criticism "helps the government to govern and take the right decision in the nation building activities."

Mentioning tremendous development activities in line with the Vision-2021 and Vision-2041 under the leadership of Prime Minister Sheikh Hasina, the President sought cooperation from the mass-media to implement different pragmatic steps of the present government to build a hunger and poverty-free 'Sonar Bangla' as envisioned by Bangabandhu, the greatest Bangalee of all times.

At the outset of his speech, Abdul Hamid paid rich tribute to Father of the Nation Bangabandhu Sheikh Mujibur Rahman, other patriotic people who embraced martyrdom during the 1971 Liberation War, 1952 Language Movement and other democratic movements of the country.

Five journalists and one organisation were given "Bangladesh Press Council Award-2018" in six categories for their outstanding contribution to journalism.

President handed over the awards to the recipients in the function. Each awardee was given Taka 50 thousand, a crest and a certificate.

Editors, senior journalists, noted cultural personalities, diplomats and foreign guests, members of parliament, secretaries concerned, among others, were present on the occasion.