PM expresses firmness about polls in due time

PM expresses firmness about polls in due time 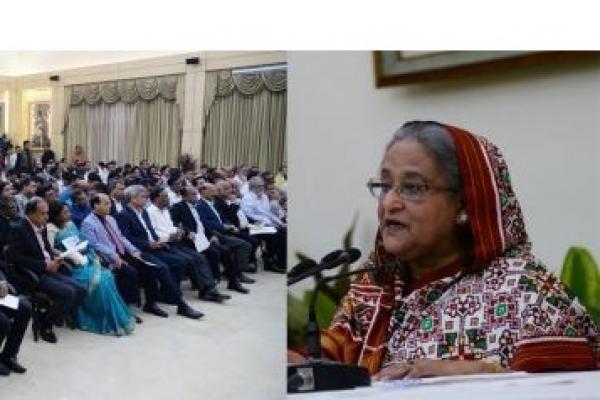 Prime Minister Sheikh Hasina today categorically said the next general election would be held in due time as per constitution, no matter whether or not BNP contests the polls.

"Ours have a multiparty democracy and it the decision of the respective parties whether they will contest the polls," she told a crowded press conference at her Ganobhaban official residence two days after her return from Italy.

The premier added: "The Election will take place in due time as per the constitution and those who believe in democracy and the peoples' right to vote, those who have trust upon the country's people, will take part in the election."

The recalled the atrocities, torture and mayhem unleashed by the BNP- Jamaat men in 2013, 2014 and 2015 centering the January 5 polls and onwards and said none could upset the scheduled polls resorting to violence again "as they (BNP) could not do so in 2014".

Her comments came as asked for comments on BNP's secretary general Mirza Falhrul islam Alamgir's remarks that their party would not take part in polls discarding Khaleda.

Sheikh Hasina said her government could no nothing if the opposition outside parliament BNP again decides to boycott the upcoming polls over its leader's imprisonment on graft charges.

"What we could do if they want to abstain from the elections . . . the court has awarded her the imprisonment, I did not and (so) I can't withdraw it either," she said.

The premier said the case against Khaleda was lodged in 2008 by the past military backed interim government led by her own confides while the independent Anti-Corruption Commission (ACC) carried out its investigation.

"The trial ran for long 10 years when she (Khaleda) exhausted all options to upset the process through filing over 80 writ petitions, getting the trial judges changed thrice by expressing no confidence (on their neutrality) and got the hearing deferred for 109 times," Sheikh Hasina said.

The premier said the chief of the past interim government Fakhruddin Ahmed was a trusted bureaucrat of Khalda and on the other hand she made MU Ahmed as the army chief superseding nine generals while the then President Iajuddin Ahmed was also made the head of the state by her BNP government.

"Yet she was convicted of graft for embezzling orphans money . . . such a crime draws punitive actions both from divinity and the mundane court," Sheikh Hasina said.

She recalled that even Khaleda's counsel Barrister Rafique ul Haque had suggested her to refund the embezzled money so that she could be acquitted from the graft charges "but she did not do so".

Asked for comments about installation of Khaleda's "fugitive and convicted" son and BNP's senior vice president Tarique Rahman as the acting party chief after her conviction the premier said "wasn't there any sane person in BNP . . . couldn't she (Khaleda) keep confidence on any of her party leaders".

Several courts earlier declared him "fugitive" as Rahman preferred to live in London apparently to evade justice while he was convicted and jailed for 10 years in absentia on the same charges as Khaleda.

Rahman is also being tried on several charges including the August 21, 2004 grenade attack on a rally of the then opposition Awami League when 23 people were killed and Sheikh Hasina narrowly escaped the assault.

The premier today referred to another pending case against Rahman in which US FBI unveiled the evidence and sent their agents to testify before a Bangladeshi court.


Asked for her comments about repeated incidents of question-paper leakages sparking nationwide outcry, the Premier urged the journalists to help authorities to track down the culprits through their networks.

But she also observed that in most cases the question papers were leaked minutes ahead of the exams giving little scopes to examinees concerned to be benefitted from such incidents.

"A question often strikes in my mind, is there any talented student having a photogenic memory to reflect the answers in the answer sheets even getting the question paper hardly 20 minutes before the exams," Sheikh Hasina said.

The Premier also opined that blocking the digital system or internet services is not the right way to address this problem while education minister or the ministry's secretary should either be blamed for the leakage.

"But, it's not at all right and we'll definitely look into the matter," she said suggesting the journalists to use their pens to suggest to abolish the tick mark system in the exams.

Asked for comments about fears of the wrong application of the proposed Digital Security Act particularly against the newsmen, the Premier assured the journalist community that there is nothing to fear.

"If no one commits any wrongdoing, there will be no miss application of it," she said.

Sheikh Hasina also said if someone commits crime under the act, steps would be taken in this regard as cyber crimes has now become a global problem.