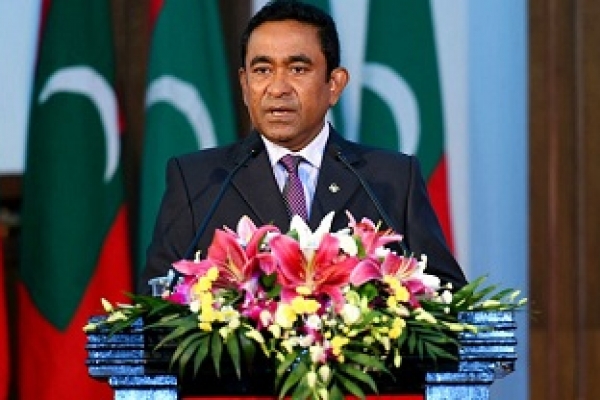 Maldives president Yameen Abdul Gayoom on Monday extended the emergency in the island nation by another 30 days after an extraordinary meeting of the national security committee of the Majlis (parliament) approved a request by him. Yameen's latest action is certain to strain ties with India even further, reports The Times of India.

For one, there is almost no possibility of Maldives sending any special envoy to India in the near future.

In fact, according to Indian government sources, there is no request from Maldives for new dates to send a special envoy to New Delhi.

According to local reports, a total of 38 MPs voted to accept the decree and forwarded it to the National Security Committee for evaluation.

All opposition MPs boycotted the sitting, alleging it was held unconstitutionally. At least 43 MPs need to be present at the Majlis chamber for a decree to pass.

Under the emergency law of February 5, Yameen had two Supreme Court judges arrested, accusing them of corruption.

Later, the remaining three judges annulled the order to release Yameen's opponents. India, sources said, was waiting to see whether Yameen lifts emergency on Tuesday at the end of the stipulated period. But the extension comes as a dampener for ties.

In the past couple of days, Maldives president Yameen has insisted the rule of law would prevail. Reports from the island said he had called for an all-party meeting though that might be a little difficult in the present circumstances, with most of the opposition leaders in prison or in exile.

On Friday, MEA spokesperson said India had "called on the government of Maldives to lift the state of emergency and restore the democratic process including the functioning of judiciary which is free of intimidation. We have noticed that the emergency which has been declared in Maldives is valid for the next few days and we will wait to see the steps which will be taken by government of Maldives after this."

Indian ambassador to Maldives, Akhilesh Mishra, met the Maldives foreign secretary Ahmed Sareer on February 12 and 15, the first meetings after Yameen declared a 15-day emergency in the island country.

However, in neither of the two meetings did Maldives ask for fresh dates for a special envoy to come to New Delhi, Indian government sources said. Relations between New Delhi and Male are likely to remain strained, at least in the immediate future in the light of the latest developments.