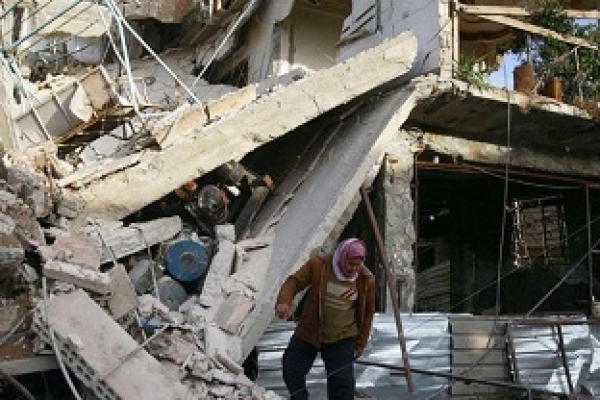 The death toll from two days of bombing by Syria's government of a rebel-held area has risen to 250, reports say.

It is the worst violence in the Eastern Ghouta area near Damascus since 2013, according to activists. More than 50 children are among the dead, they say.

The UN has warned that the situation is "spiralling out of control".

Meanwhile the Damascus government has sent forces to confront Turkish troops who have crossed the border to push back the Kurds in northern Syria.

Turkey fired shells near the advancing columns, which, it claims, forced the pro-government fighters into retreat.

The Syrian military has not commented on the reports from the Eastern Ghouta but says it carried out "precision strikes" on areas from which the shells were launched.

A UN spokesperson said at least six hospitals had been hit in the area on Monday and Tuesday.

The Syrian Observatory for Human Rights, a UK-based monitoring group, said at least 250 people had been killed in air strikes and artillery fire since then.

It said it was the highest 48-hour death toll since a 2013 chemical attack on the besieged enclave. About 1,200 people were injured.

Activists say at least 10 towns and villages across the Eastern Ghouta came under renewed bombardment on Tuesday.

The UN called for a ceasefire to allow humanitarian aid to be delivered and the wounded to be evacuated.