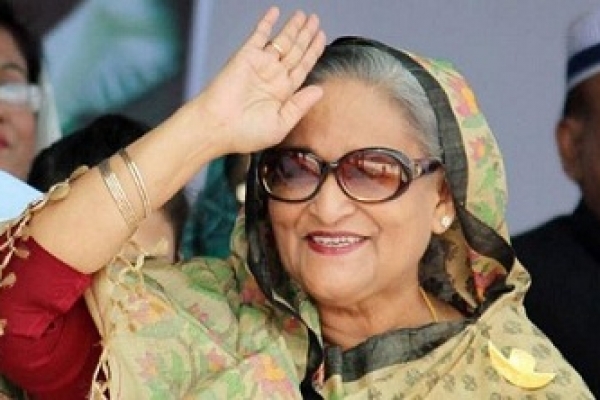 “The army will have to keep up the trend of democracy and constitution and make more important contributions to establishing a modern, developed and prosperous Bangladesh,” she told the 6th Reunion of the Bangladesh Army Engineer Corps at the Engineer Centre and School of Military Engineering (ECSME) at Qadirabad Cantonment this morning, BSS reports.

Sheikh Hasina also asked the members of Bangladesh Army to keep a “constant vigil” to face any internal and external threats for safeguarding the country’s constitution and sovereignty.

“You will have to also remain alert so that the country’s law and order is maintained... we want to ensure peace and security of the people and terrorism, militancy and drug don’t destroy the society, she said.”

The PM added: “We want to put Bangladesh on a dignified position of the world and to achieve the goal, all will have to work together.”

The prime minister inspected a spectacular parade of a smartly turned out contingent of the Army Engineering Corps and took salute. Lieutenant Colonel Fariduddin was the parade commander.

Ministers, the premier’s advisers, parliament members, the chiefs of three services and high civil and military officials were present on the occasion.

Earlier on her arrival at the ECSME Parade Ground, the prime minister was received by Chief of Army Staff General Abu Belal Muhammad Shafiul Huq and the colonel commandant and the commandant of the ECSME.

Sheikh Hasina said she has a strong family bond with Bangladesh Army as her two pothers—Shaheed Sheikh Kamal and Shaheed Sheikh Jamal—were members of the army.

“My youngest pother Sheikh Russel also wanted to join the army,” she said and mentioned with an emotion charged voice that her three pothers were brutally killed on August 15 in 1975.

The prime minister said her government took various measures for turning the professional armed forces into world-standard modern forces which are inspired with the spirit of the Great War of Liberation.

She said Bangladesh earned independence under the great leadership of Father of the Nation Bangabandhu Sheikh Mujibur Rahman in 1971 through the Liberation War.

She said Bangabandhu had started work to build the war-ravaged Bangladesh taking the entire nation with him and framed a defence policy to build a strong and trained army suitable to an independent country.

“We’ve kept the continuity of the development and expansion of Bangladesh Army by enacting the Armed Forces Goal-2030 in the light of the Defence Policy framed by the Father of the Nation,” she said.

The premier said her previous government during 1996-2000 tenure made massive development and welfare of Bangladesh Army. “In the last nine years, we’ve increased the capabilities of the force side by side with making infrastructural change,” she said.

Sheikh Hasina said the army was equipped with sophisticated arms and equipment alongside establishing new infantry divisions and brigades.

“We’ve set up armoured, composite and para commando brigades as well as Bangladesh Infantry Regiment,” she said. To modernize and make the force time-befitting, she said, modern vehicles, helicopters and arms and ammunitions have been inducted into it.

The premier said the living standard of the army members has improved due to sincere efforts of her government. “Modern arrangements have been made to provide better treatment from the combined military hospitals.

She said the epoch-making bone marrow transplantation centre and burn and plastic surgery centre have been set up in the Dhaka CMH. As a result, the people of the country are also receiving modern healthcare services alongside the members of the army, she said.

Sheikh Hasina said the government has constructed housing, messes, SM barracks and made arrangements for training for the soldiers of ranks of the army.

The prime minister said the patriotic army has earned overall acceptability thanks to its integrity, work efficiency and various public service-oriented activities.

She said the armed forces have always been praised for their responsible role in providing services to the distressed humanity and protecting the life and property of the people.

Sheikh Hasina said Bangladesh is now a ‘pand name’ in maintaining peace in the UN Peacekeeping Missions which is a matter of pride for the country.

The premier said the armed forces have set up a unique example by extending help with responsibility and sympathy to the affected people during the natural disasters in recent time.

She said the army has been playing a praiseworthy role in assisting the forcibly evicted Myanmar citizens who took shelter in Bangladesh. “It’s further brightening Bangladesh’s image in the world,” she said.

Elaborating her government’s tremendous achievements in different fields, the prime minister said the aim of her government is to ensure development and welfare.

“Our government is a government of the people and our goal is making overall development and welfare,” she said. Sheikh Hasina said the government made epoch-making development in socioeconomic sector in the last nine years.

“Bangladesh is now a role model of development in the world and the people are getting fruits of uplift,” she said.

The premier said Bangladesh is going to be elevated to a developing country from the least developed one as it has already fulfilled all criterions in this regard.

“We’ll turn Bangladesh into a middle income country by 2021 and a developed one before 2041 Insha Allah,” she said.

The prime minister said the Corps of Engineers is an important and traditional organisation which has a glorious history of sacrifice.

Shaheed Birshreshtha Mohiuddin Jahangir was a member of the corps, she said. Besides, there is Lt Colonel Abdul Qadir after whose name this cantonment was named.

Later, the prime attended the annual commanders’ conference of the Army Engineer Corps.