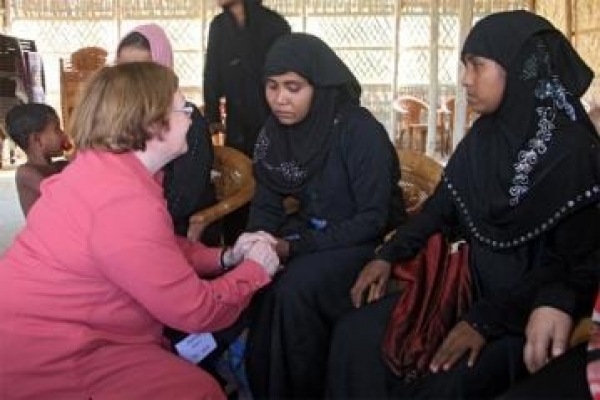 Three women Nobel Peace Prize winners today called atrocities on Rohingyas a case of "clear genocide" as they are on a visit to Cox's Bazar while European Union in Brussels prepares new Myanmar sanctions over the country's crackdown on the ethnic minority Muslims.

International media reports said EU foreign ministers in a meeting in Brussels today, meanwhile, agreed to draw up a list of sanctions to be slapped on Myanmar generals, a development that coincided with the emotion- choked statements of the three Nobel Laureates.

"This is clearly, clearly, clearly genocide that is going on by the Burmese government and military against the Rohingya people," of the three Mairead Maguire told newsmen after visiting the camps in Cox's Bazar while her voice choked and eyes were on tears.

The Northern Irish Nobel Laureate described the crackdown as an "orchestrated attempt" to wipe up Rohingyas from Myanmar and "out of history".

Maguire and the two other globally acclaimed women peace activists - Iran's Shirin Ebadi and Tawakkol Karman -- made their personal statements after their joint visit to the overcrowded Rohingya camps on Saturday and Sunday and warned fellow laureate Aung San Suu Kyi that she could be prosecuted for "genocide" unless she "woke up" about violence.

Karman said "we identified the crisis as genocide" and "we will follow it (the issue) up until they (perpetrators) are exposed to the International Court of Justice".

"If she (Suu Kyi) will continue her silence, she will be one of them," said Karman, fighting back her tears adding "it is an appeal to our sister Aung San Suu Kyi to wake up".

The three women also visited the office of Bangladesh's Refugee, Relief and Repatriation Commissioner (RRRC) in Cox's Bazar and held a discussion with RRRC Abul Kalam on the second day of their weeklong visit to the refugee camps as part of a mission of Nobel Women's Initiative, a platform of six female peace laureates established in 2006.

But their statement came as reports from Brussels said European Union foreign ministers agreed on Monday to prepare sanctions against Myanmar generals over the killings of Rohingya Muslims and to strengthen the EU arms embargo, accusing them of grave human rights abuses.

The reports said the EU foreign ministers on Monday also ordered EU foreign policy chief Federica Mogherini to propose ways to toughen an EU embargo blocking the provision of arms and equipment that could be used for internal repression.

In a statement, the ministers called for "targeted restrictive measures against senior military officers of the Myanmar armed forces responsible for serious and systematic human rights violations without delay".

The proposed action appeared to be EU's toughest yet in its efforts to hold the Myanmar military accountable for the abuses while United States and Canada earlier issued sanctions against the South East Asian country.

The reports said the EU foreign ministers also sought to strengthen the bloc's 1990s-era arms embargo on the Southeast Asian country that remains in place.