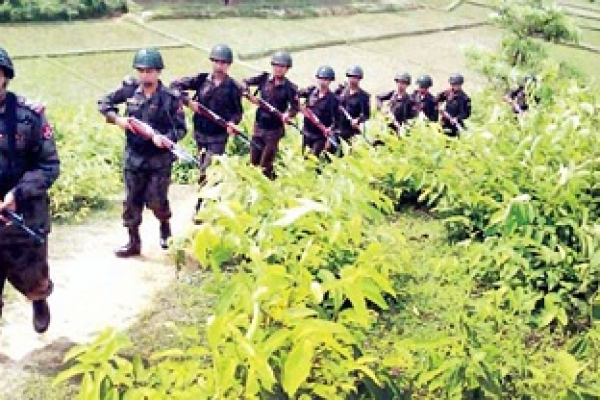 Myanmar Army opened fire along Tambru border in Naikkhonchhari upazila of Bandarban on Thursday night, apparently to frighten the Rohingyas who were stranded in the no-man's land between Bangladesh and Myanmar.

Deputy commanding officer of Border Guard Bangladesh Battalion-34 Major Iqbal Ahmed said the Myanmar Army men tried to cross the border around 7:50pm. ‘As the Rohingyas stranded on the no-man's land started shouting, they returned to the bunker shooting a bullet in the air,’ he said, UNB reported.

Earlier, in the day, the members of Border Guard Bangladesh were put on high alert as Myanmar Army took position along Tambru border in Naikkhongchhari of Bandarban with heavy arms and ammunition.

The Foreign Ministry also summoned Myanmar ambassador in Dhaka Lwin Oo over the deployment of troops and artillery and lodged its protest strongly.

‘Deploying army with heavy arms and ammunition on border goes against the border norms. We're on high alert and observing their activities,’ additional director general (operation and training) of BGB headquarters Brigadier General Mujibur Rahman told a press briefing at the BGB headquarters on Thursday afternoon.

‘BGB is always ready to perform its duty for the sake of the motherland if any serious situation is created. However, no alarming situation has been created yet...the situation is under control till now,’ Mujibur added.

A good number of Rohingyas gathered near the zero point of the Myanmar border in the last one month where the members of Myanmar Border Guard Police along with Myanmar Army are seen conducting various activities, including making barbed-wire fence and setting up advance technological surveillance equipment, he said.

According to an intelligence report and BGB surveillance, a huge number of Myanmar Army with heavy arms and ammunition was deployed between the border outposts 34 and 35, opposite to Tambro, from 10:00am. Besides, the movement of military pickups, truck and lorries was seen along the border, the BGB official said.

‘We've sent a protest note to the BGP calling for a flag meeting. However, we're yet to get any response from the Myanmar side till the afternoon,’ he said, adding that they were expecting the response very soon.

Replying to a query, Mujibur said the BGB has asked for the flag meeting to know the strategy of the Myanmar Army for increasing their strength along the border.

Meanwhile, acting foreign secretary Rear Admiral (retd) Md Khurshed Alam called the Myanmar envoy at his office and handed over a protest note, an official at the Foreign Ministry said.

‘They've brought troops and artillery on border areas. This is a violation and we protested it,’ the official said.

The Foreign Ministry conveyed concerns of Bangladesh on the military build-up around the border pillar No 34 near the Tambru border area where several thousand Myanmar residents have been staying on the zero line.

Khurshed Alam conveyed to the Myanmar ambassador in Dhaka that such military build-up will create confusion within Bangladesh and escalate tensions on the border.

He told the ambassador to convey to the Myanmar authorities for the immediate pullback of Myanmar security forces along with military assets from the area, said the Foreign Ministry.

The acting foreign secretary also expressed the concern that such event may hamper repatriation process which both sides agreed to implement.

A diplomatic note on the subject was handed over to the ambassador.

Sources at the Foreign Ministry said some Rohingyas are living on the zero line along the Bangladesh-Myanmar border and they did not enter Bangladesh crossing the line. ‘It seems that the Myanmar troops are trying to create fear among them. We protested it,’ another official said.