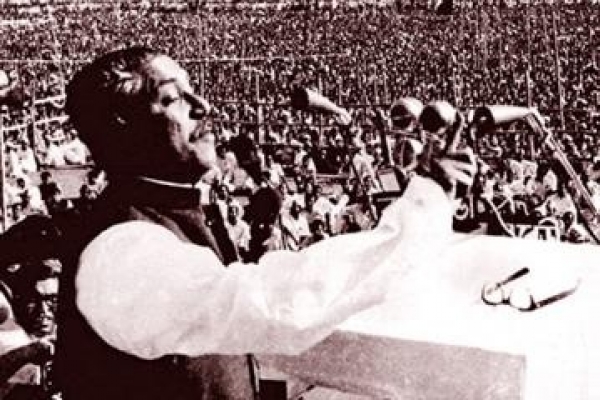 The historic March 7 will be observed today, recalling the greatest Bangalee leader of all time Bangabandhu Sheikh Mujibur Rahman and his epoch-making speech that drew the crucial strategy to make Bangladesh a sovereign state.

This year the nation is remembering the 'red-letter day' in the country's history with much enthusiasm, fanfare and pride as the historical speech delivered on this day in 1971 by the architect of the country's independence has got a prestigious place in the world's documentary heritage.

In October last year, the United Nations Educational, Scientific and Cultural Organisation (UNESCO) included the speech in the Memory of the World International Register - a list of the world's important documentary heritage. This recognition has taken the country's status to a new stature in the global context.

Earlier in 2014, Bangabandhu's March 7 speech was included in a book as one of the most rousing and inspirational wartime speeches in the last 2,500 years. Eminent historian Jacob F Field wrote the book, which included speeches of many world leaders including Winston Churchill, Abraham Lincoln and Mao Zedong.

On March 7 in 1971, Bangabandhu delivered a momentous speech at the Race Course Maidan, now Suhrawardy Udyan in Dhaka, effectively declared the War of Independence. In the 19-minute extempore speech before a spontaneous gathering of millions of people of former East Pakistan, he unequivocally declared - "The people of the country shall be freed, Inshallah!"

Bangabandhu also made a fervent call to the roaring people from all walks of life to take preparations for armed struggle against the tyranny, exploitation, subjugation and deprivation by Pakistani military junta with whatever they possessed and transforming every house into a fortress.

The people were overwhelmed and imbued with the spirit of this supreme speech of independence, which is said to be only comparable to the Gettysburg speech of the President of the United States, Abraham Lincoln.

The forceful speech inspired people of all walks of life to prepare for the war, which eventually began after the Pakistani regime on March 25, 1971 launched on the unarmed Bangalees the worst genocides in history, which continued in the subsequent nine months.

At the instruction of Bangabandhu, the brave nation fought successfully the War of Liberation and ultimately liberated Bangladesh from the Pakistani occupation on December 16, 1971 with the assistance of the allied Indian forces.

According to political analysts, the 7th March speech of Bangabandhu was not only a call for this nation to fight for freedom, it was rather a direction for all nations around the world.

On the eve of the day, President Abdul Hamid and Prime Minister Sheikh Hasina gave separate messages. In their messages, they recalled with utmost respect the Father of the Nation and his immense courage, strong leadership and right directions that led the nation to achieve the Independence of Bangladesh.

They urged the people to forge a greater unity once again for the development of the country and making Bangladesh a prosperous state.

Marking the day, different socio-cultural and political organizations, student and professional bodies have chalked out elaborate programmes including laying wreaths at the portrait of Bangabandhu and holding discussions and rallies.