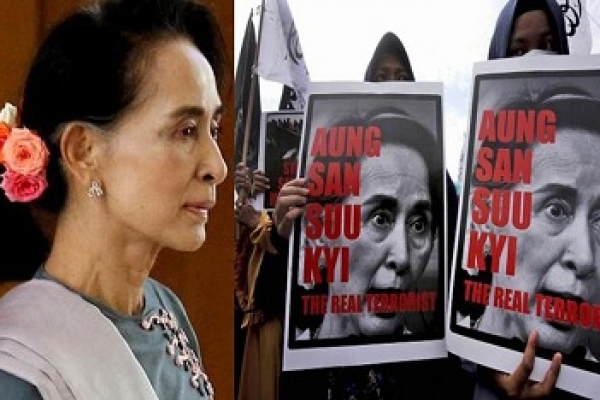 The United States Holocaust Museum has revoked a human rights award given to Aung San Suu Kyi, the civilian leader of Myanmar, over her failure to use her “moral authority” to halt a brutal military campaign.

The museum announced on Wednesday that it had withdrawn the Elie Wiesel award, presented to Aung San Suu Kyi in 2012. Officials cited her refusal to condemn or stop the mass killings of Myanmar’s Muslim Rohingya minority.

Aung San Suu Kyi had earned comparisons to South Africa’s Nelson Mandela after spending 15 years under house arrest for opposing the country’s military dictatorship. She became an international lodestar and won the Nobel peace prize in 1991.

Her party won a landslide victory in 2015 and she became state counsellor. In response, Barack Obama relaxed sanctions, gave financial assistance and became the first sitting US president to visit Myanmar.

But Aung San Suu Kyi’s international reputation has collapsed over the Rohingya massacres and she has been criticised as an apologist for the purges. She has not even spoken the word Rohingya in public.

Sara Bloomfield, director of the Holocaust Museum, explained its reasoning in an open letter to the Myanmar embassy in Washington that was published on the museum’s website.

“Based on inspiration that you created for millions around the world, with your long resistance to military dictatorship, and your advocacy for freedom and human rights for all the people of Myanmar, we were honored to present you with the first Elie Wiesel Award in 2012,” Bloomfield wrote. “It is with great regret that we are now rescinding that award. We did not take this decision lightly.”

The museum has been “closely monitoring” the Myanmar military’s campaign against the Rohingya and Aung San Suu Kyi’s response to it, Bloomfield continued, making “numerous visits” to Myanmar and Bangladesh to obtain firsthand evidence. The museum has also published findings that include “mounting evidence of genocide”.

The Burmese military, allied with armed Buddhist civilians, has killed thousands of Rohingya in the western state of Rakhine since last August. About 700,000 more have fled to Bangladesh.

The US has described Myanmar’s denials of ethnic cleansing as “preposterous” and called on the UN security council to pressure Aung San Suu Kyi “to acknowledge these horrific acts that are taking place in her country”.

The museum had hoped that Aung San Suu Kyi would speak out and try to end the brutal campaign, the letter added. “The National League for Democracy, under your leadership, has instead refused to cooperate with United Nations investigators, promulgated hateful rhetoric against the Rohingya community, and denied access to and cracked down on journalists trying to uncover the scope of the crimes in Rakhine State.”

The Reuters journalists Wa Lone, 31, and Kyaw Soe Oo, 27, investigating the deaths of 10 Rohingya men and their burial in a mass grave, were arrested and face 14 years in prison. Authorities in Myanmar accuse them of possessing state secrets.

Bloomfield acknowledged: “We understand the difficult situation you must face in confronting decades of military misrule and violence in your country and that institution’s still powerful constitutional role. However, the military’s orchestration of the crimes against Rohingya and the severity of the atrocities in recent months demand that you use your moral authority to address this situation.”