'Bangladesh, Singapore can complement each other'

'Bangladesh, Singapore can complement each other' 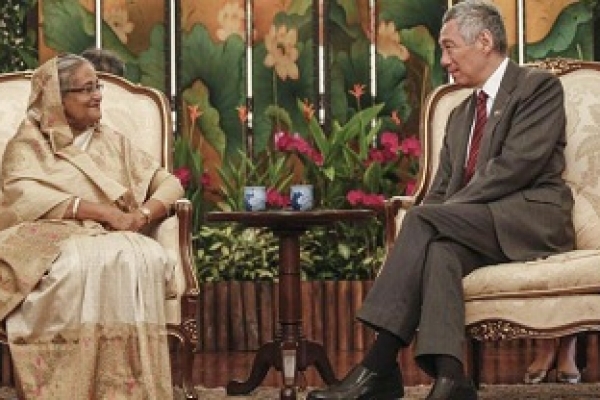 Bangladesh and Singapore are at different levels of development, but can complement each other in their pursuit of economic growth, Prime Minister Sheikh Hasina said on Monday, reports The Straits Times.

Singapore has the capital, advanced technology and know-how, while Bangladesh can offer a large, young and educated workforce, she said on the second day of an official visit which aims to forge more business opportunities between the two countries.

"These comparative advantages may be harnessed to our mutual benefit," Hasina said in her toast speech at the Istana, where she was hosted to lunch by Singapore Prime Minister Lee Hsien Loong.

Her Singapore counterpart acknowledged that Bangladesh and Singapore's strategic locations - with Singapore situated between the Indian and Pacific Oceans and Bangladesh located in the heart of South Asia - facilitate the flow of people, goods and investment.

The two countries should do more together, he added, noting that Singapore-based companies are keen on the growing Bangladeshi market.

Sembcorp is one of the largest investors in Bangladesh's energy sector, with over US$1.1 billion invested in power plants, while PSA is interested in exploring opportunities at Chittagong Port, the busiest seaport on the Bay of Bengal's coastline.

A slew of agreements will be signed during the visit, which Hasina expects will to "usher in a new era of economic cooperation between our two countries".

Hasina said: "Singapore continues to be a favourite destination for Bangladeshi workers. I hope that Singapore will continue to provide them with a decent work atmosphere."

Hasina noted that Bangladesh and Singapore share a similar outlook on many issues of global concern.

"Our positions are based on a deeper understanding of, and respect for, each other's values, principles, and approaches," said Hasina, adding that Bangladesh hopes to forge deeper cooperation with Asean during Singapore's term at the regional group's helm.

PM Lee meanwhile paid tribute to how rich cultural links between Bangladesh and Singapore have reinforced their longstanding friendship.

He noted that writer Rabindranath Tagore - the first Asian to be awarded the Nobel Prize for Literature, and the composer of Bangladesh's national anthem - had visited Singapore in the 1920s, and written about the region.

Tagore Avenue along Yio Chu Kang Road - "in my Parliamentary constituency", PM Lee noted to laughter - is named in his honour, and his works still bring Singaporeans and Bangladeshis together.

He added: "These strong people-to-people linkages form a key basis for our multi-faceted relationship."

In the morning, Hasina received a ceremonial welcome at the Istana, where she also called on President Halimah Yacob.