PM for collective resistance against militancy

PM for collective resistance against militancy 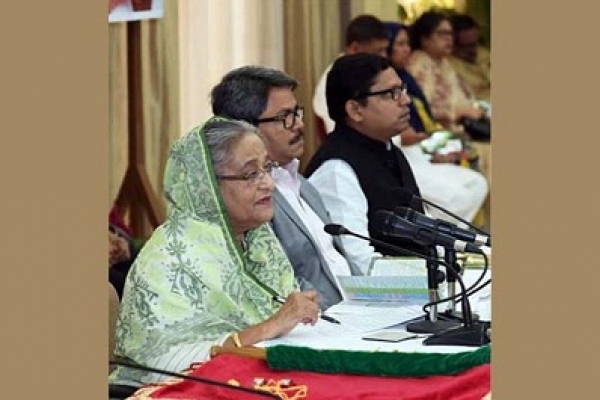 Prime Minister Sheikh Hasina today stressed the need for forging a collective resistance of all against militancy as it has become a common problem of the world which hindering peace, prosperity and development.

“I call upon all to take collective measures of resistance if any tendency of militancy and terrorism is seen among any children, teenagers, youths, students, teachers and commoners as well,” she said.

She was opening the first-ever environment friendly and nonstop intercity train ‘Bonolota Express’ on Dhaka-Rajshahi route through video conference from her official residence Ganobhaban here.

The premier urged all the people including guardians, teachers, public representatives, imam and moazzin of mosques, religious teachers and people of other religions to stay alert against the terrorism and militancy.

Referring to the recent gun and bomb attacks in New Zealand and Sri Lanka, she said, “Attempts are being made to carry out such heinous acts in Bangladesh. Our intelligence and law enforcement agencies have remained alert to avert such attempts.”

The premier requested the imams and moazzins to give sermon against the adverse impact of the militancy in the khutbas during Jumma prayers as the Islam likewise the other religion doesn’t allow it in the name of religion, saying that the Islam is the best religion in the world in view of keeping peace and maintaining humanity.

She also requested to pray for the peace of the departed souls of the people killed in shootings in New Zealand and bomb blasts in Sri Lanka in which many Muslims including Bangladeshis were killed.

The most unfortunate matter is that many children including Zayan Chowdury, grandson of Sheikh Fazlul Karim Selim, was killed in the bomb attacks in Sri Lanka, she said, adding, “I want no such incidents would take place in future.”

She reiterated her appeal to the people involved in militancy and terrorism to the heinous acts to stay away as it brings no welfare for the mankind.

The train will run with some modern facilities like bio-toilet, recliner chair, Wi-Fi, LED display, and save at least one and a half hour journey time than those of the existing three express trains.

According to the schedule, the train will start from Rajshahi at 7:00am and reach Kamalapur Railway Station by 11:40am. It will leave at 1:15pm and reach Rajshahi at 6:00pm.

Principal Secretary to the PM Md Nojibur Rahman moderated the function while Railways ministry secretary Md Mofazzal Hossain gave a brief presentation on the overall development of in railway sector.

The PM later opened seven institutes and establishment in Gopalganj, Sirajganj, Kishoreganj and Chattagram under the Fisheries and Livestock ministry through video conference from her official residence Ganobhaban here.-BSS