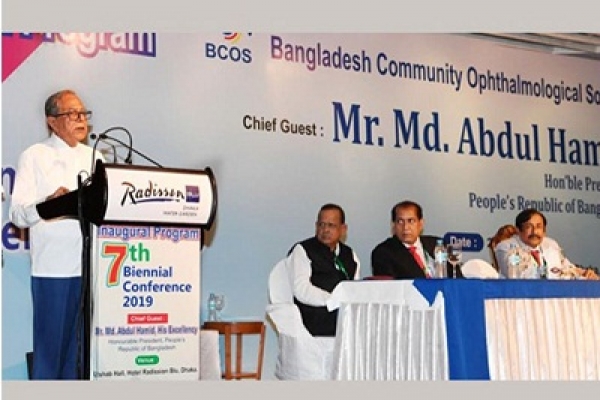 President M Abdul Hamid today urged doctors and others concerned to devise ways to ensure access of ordinary people to quality treatment at lower cost without hassles as he opened a specialist physicians’ conference in the city.

“Ensure that no patient becomes the victim of harassment for any reason,” he said opening the 7th biennial conference of Bangladesh Community Ophthalmological Society (BCOS) at a city hotel The President added: “Take care that no patient is deprived of proper service in the name of unnecessary medical tests.”

The President conferred with honourary awards six prominent ophthalmologists and with special acknowledgements seven others for their outstanding contribution to their services.

“After the almighty Allah, it is the doctors on whom the people depend for healing their diseases,” he said.

The head of the state further urged the specialised doctors to reduce their fees so the ordinary and poor people could reach them for treatment.

“Take steps to reduce your charges as common people can’t afford it,” he said.

The President said the present government has taken various pragmatic steps, including construction of infrastructure, appointment of doctors and nurses, bringing modern medical equipments to reach the health services at grassroots level.

“But, it’s a matter of regret that doctors and nurses start lobbying for transfer if they’re posted outside the district headquarters, even outside Dhaka or divisional city which deprives people of Upazila and union level of
getting the desired medical services,” the President said.

President Hamid expressed his grave concern over the negative attitude of some doctors and nurses, saying, “Due to this, people of upazila and union levels are being deprived of getting the desired medical services.”

The President asked the health administration and authorities concerned to intensify strict vigilance against this ill-attempt.

He directed the doctors to perform their duties and responsibilities — at the newly transferred hospitals and treatment centers — with utmost sincerity by providing optimum services to the patients. Abdul Hamid said
different organisations of physicians could play an effective role in this regard.

Noting that setting up eye camps is a noteworthy initiative for the rural people, President Hamid said, “But in some cases, patients become blind after doing treatment in those eye camps which is very tragic and unexpected.”

The President lauded the role of ophthalmologists in the medical services as well as for the overall development of the country.

He hoped that this conference would help exchange of mutual expertise and experiences among the ophthalmologists and offer new directives and techniques in eye treatment.