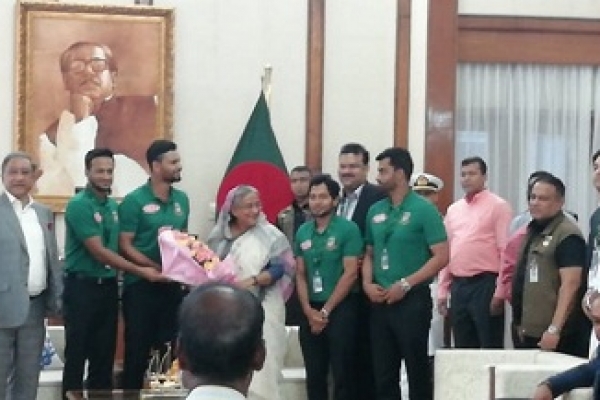 Prime Minister Sheikh Hasina today advised the Bangladesh cricket team to play in the upcoming World Cup (WC) with utmost confidence and taking no pressure in their minds.

“Don’t take any pressure, play your natural games with self-determination… one day we will surely win the World Cup Insha Allah,” she said.

The premier said this while the Bangladesh National Cricket Team led by One Day International (ODI) Captain Mashrafe Bin Mortuza called on her at her official Ganabhaban residence this afternoon ahead of their ICC World Cup Cricket mission in England and Wales, reports BSS.

The prime minister told the players of the squad that there is no need to be panicked during any crisis moment. “Face the situation with cool head and apply your tactics,” she said.

Sheikh Hasina, also an avid cricket-lover, asked them to play calculative game in the field and not to be afraid of any team whoever it is.

The ICC Cricket World Cup 2019 is going to be kicked off in England and Wales on May 30.

In the 12th edition of the cricket’s biggest extravaganza, a total of 10 teams including Bangladesh will compete for the most-coveted trophy.

According to the schedule, the first match of the World Cup 2019 will be held between England and South Africa at Oval of London, UK on May 30.

Bangladesh national cricket team in their first match of the tournament will face South Africa at the same venue on June 2.

Meanwhile, before the ICC World Cup Cricket, Bangladesh National Cricket Team will play a Tri-Nation ODI Cricket tournament in Ireland beginning on May 5.

Other teams of the tournament are the West Indies and hosts Ireland.

To play the tournament, Bangladesh team will leave Dhaka for the Irish capital of Dublin tomorrow.-Jagonews24.com