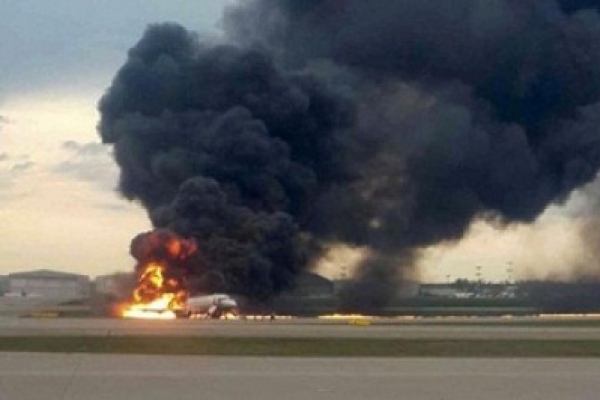 At least 41 people were killed after a Russian plane made an emergency landing and burst into flames at Sheremetyevo airport in Moscow.

Two children and a flight attendant were among the dead, Russian media reports.

One witness said it was a "miracle" anyone escaped the jet, which was carrying 78 passengers and five crew.

Veronika Skvortsova, head of Russia's ministry of health, said in a statement that six patients are in hospital - three of whom are in a critical condition.

Aeroflot, Russia's national carrier, said the plane was forced to return to the airport "for technical reasons", but did not elaborate.

The aircraft, a Sukhoi Superjet-100, departed Sheremetyevo airport at 18:02 local time (15:02 GMT) for the city of Murmansk.

The crew issued a distress signal when "malfunctions" occurred shortly after departure.

After making an emergency landing at the airport, the plane's engines caught fire on the runway, Aeroflot said in a statement.

The crew "did everything to save the passengers," who were evacuated in 55 seconds, the firm said.