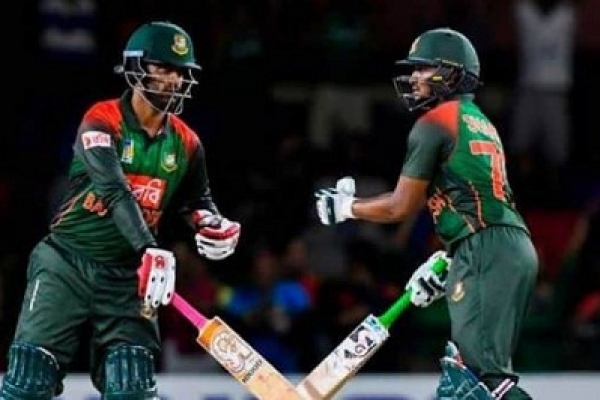 Chasing 262, openers Tamim and Soumya set the perfect platform for the Tigers, making 144 in the first wicket.

The stand was broken when Roston Chase removed the latter, who hit 73 off 68 deliveries thanks to nine fours and a six.

Shakib then joined the party, and after the fall of Tamim, brought the victory with Mushfiqur Rahim, who slammed 32 in 25 balls.

Winning the toss, the Caribbean side had opted to bat first. Shai Hope and Sunil Ambris (38) put on 89 in the first wicket before Mehidy Hasan Miraz struck to hand the Tigers their first wicket.

Darren Bravo fell cheaply soon, but Hope and Roston Chase now made another big partnership in the innings.

Chase contributed 51 in the 115-run stand, but both the batsmen were out in quick succession and the others failed to keep the momentum as the Bangladesh bowlers gave them few chances.

Hope’s innings ended on 109, made in 132 balls courtesy of 11 fours and a six, with Mashrafe Bin Mortaza claiming the big wicket.

The Bangladesh skipper was the most successful bowler with three wickets while Mustafizur Rahman and Mohammad Saifuddin bagged two each.

The Tigers will play their next game against hosts Ireland on Thursday.- en.prothomalo.com