No mercy to killers, money-launderers: PM

No mercy to killers, money-launderers: PM 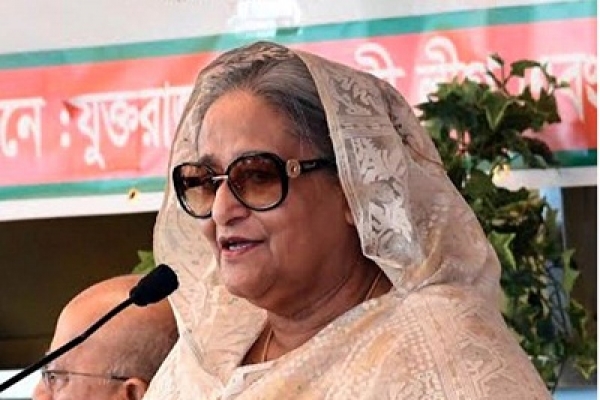 Hinting at BNP’s Acting Chairman Tarique Rahman who is hiding in London, Prime Minister Sheikh Hasina here today said the killers and money-launderers must be punished.

“We’ve tried the killers of Bangabandhu and war criminals and wherever the killers and money launderers hide and whatever money they spend, there is no mercy to them and the nation won’t forgive them,” she told a view-exchange meeting at Taj Hotel here this afternoon.

The premier said the courts have given verdict against the killers and money-launderers. “We’ll take measures so that the judgement is executed… whatever slogans they raise and whatever scolding they give, they must be punished,” she said.

Pointing out the BNP’s false propaganda against the government, Sheikh Hasina, also the Awami League president, said those who were born through falsehood and illegally see everything illegal.

“Trading with lies is the character of the BNP and they’ve become owner of huge wealth by embezzling the orphans’ money and siphoning off money abroad,” she said.

“I believe in a word that the victory of the truth is a must,” she continued.

Referring to the Awami League’s landslide victory in the last general elections and country’s tremendous development over the last 10 years, the prime minister urged all to stay alert so that the victory is upheld and none can play ducks and drakes with the fate of the people like the past.

“You’ll have to remain alert so that none can play ducks and drakes with the fate of the people and distort the history of the country,” she said.

Regarding the construction of the much-awaited Padma Bridge, the prime minister said the government is constructing the bridge with its own funding. “Two kilometres out of 6.5 kilometres have been visible now,” she said.

Sheikh Hasina said allegations of graft regarding the bridge were raised against the government. “But we didn’t accept the allegation, rather we protested as we had such courage,” she said.

The prime minister said: “Why we would accept the allegation which we didn’t do … an organisation will put blame on us and we will accept it, this will never happen. We don’t want to come to power with any blame.”

She continued: “I’ll not take responsibility of false blame and I know the people love the truth and value it… I also know that the path of truth is tough and I’ve come to this stage choosing this way.”

About the BNP’s debacle in the last general elections, the prime minister said the party did not take the polls as a competition, rather it took it as a “nomination trade”.

“They’ve given nominations to a number of candidates in a single seat and they excluded prospective candidates who had chance of winning election,” she said.

The Awami League chief said her party secured a landslide victory in the polls as the women and young people cast vote in favour of “boat” in a huge number.

Highlighting the country’s tremendous socioeconomic development over the last 10 years, Sheikh Hasina said her government is working hard to fulfill the basic needs of the people.

Sheikh Hasina said her government has been able to bring down poverty rate to 21 percent from 41 percent. “The country expects 8.13 percent GDP growth in the current fiscal year thanks to various pragmatic steps of our government,” she said.

The prime minister expressed her determination that there will not be a single person to remain homeless. “Nobody lives in a hut now,” she said.

About the development of education, Sheikh Hasina said the government framed a time-befitting education policy and is distributing textbooks free of cost up to the secondary level.

She said Qaumi madrasas were neglected for a long time. “But we have recognised the Dawrae Hadith under Qawmi Madrasa Education Boards as equivalent to Masters Degree in Islamic Studies and Arabic,” she said.

The prime minister said the government has introduced mid-day meal under the voluntary school-feeding programme.

In this connection, she urged all including expatriates to come forward to supplement the government efforts.

Sheikh Hasina reaffirmed her determination to build Bangladesh as a middle income country by 2021 and hunger and poverty-free developed and prosperous one by 2041. “We’ll celebrate Mujib Year from 2020-2021,” she said.

The prime minister said her government framed the Delta Plan-2100 to present a beautiful future to the next generations and started is implementation. “We’re executing the 7th five-year plan and going to frame the 8th five-year plan,” she said.

At the outset of her speech, the premier greeted the countrymen including the expatriate Bangladeshis on the occasion of holy Ramadan.

She also extended Eid greetings to them in advance.-BSS