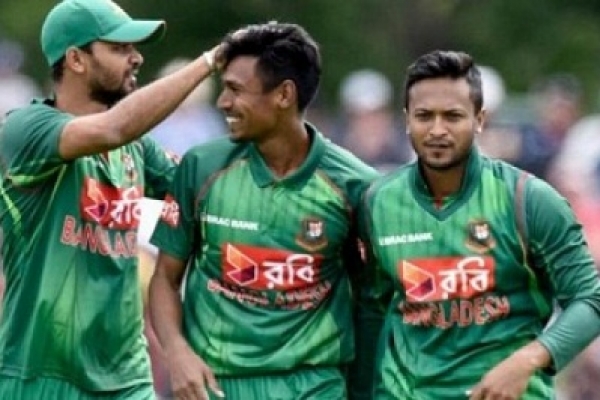 Bangladesh batsmen easily chased down the target after the bowlers had restricted West Indies to 247 for 9 in their Tri-Nation Series match in Dublin on Monday.

The win sent the Tigers, who are yet to be beaten in the tournament, to the final thanks to their two wins over the Caribbean side and a draw in the washed-out game against hosts Ireland.

West Indies had already reached the final after two wins over the Irish.

In their chase, openers Tamim Iqbal (21) and Soumya Sarkar made a decent start of 54 followed by a 52-run partnership between Soumya and Shakib Al Hasan (29).

Two balls later, Soumya's innings also came to an end. He hit 54 off 67 balls thanks to four fours and two sixes.

Mushfiqur Rahim and Mohammad Mithun now added 83 in the fourth wicket to ensure the win. Mithun missed his fifty for seven runs, but his 43-run innings, studded with two fours and two sixes, delighted the fans.

Mushfiq was the top-scorer, with a 63 off 73, yet his return to the pavillion with a few runs to close the game did not please anyone.

Mahmudullah also played his part with 30 in 34 balls.

Asked to bowl first, Mustafizur Rahman bagged four wickets while Mashrafe Bin Mortaza grabbed three as Bangladesh did not give West Indies a chance to post a big total.

Captain Mashrafe gave his team the first breakthrough when he removed opener Sunil Ambris on 37.

Sunil had looked in good form, hitting four fours in his 19-ball 23-run innings, but Mashrafe made sure he could not make it big.

Mehidy Hasan Miraz then trapped Darren Bravo (6) leg before and Mustafiz followed that with the wickets of Roston Chase (19) and Jonathan Carter (3).

In-form Shai Hope and Jason Holder then made a hundred run partnership, but the run rate never escalated.

Hope missed out on a centurty for just 13 runs, as Mashrafe returned to break that stand while the pacer also sent Holder to the pavillion in his next over.

The Tigers had handed pacer Abu Jayed his ODI debut in the game, but he could not claim a single wicket conceding 56 runs in the nine overs he bowled.

Bangladesh will play hosts Ireland in their remaning group game on Wednesday, which might give the fringe players a chance to prove their worth.-en.prothomalo.com