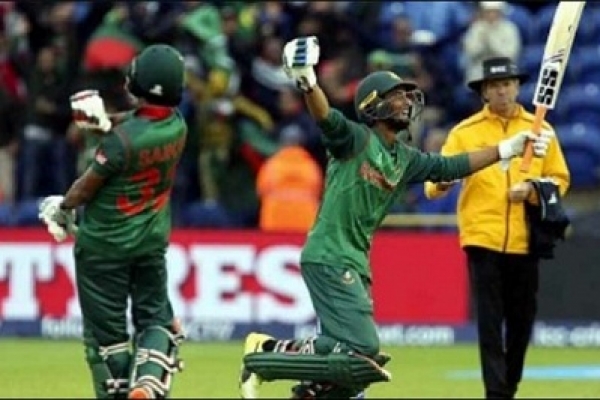 Delightful fifties by Soumya Sarkar and Mosaddek Hossain led Bangladesh to a memorable five-wicket win over West Indies in the final of the Tri-Nation Series in Dublin on Friday.

Despite a great start by openers Tamim Iqbal (1  and Soumya, who made 59 in 5.2 overs in the opening partnership, the fall of the former and Sabbir Rahman (0) in quick succession got the fans worried.

Mushfiqur Rahim and Soumya then added 49 in the third wicket to keep the run wheel going, but the fall of the duo meant Bangladesh were four wickets down on 134, still needing 76.

Mosaddek Hossain then hammered Bangladesh’s fastest ODI fifty to seal the first ever tournament final win for the Tigers.

The middle-order batsman reached a half century in 23 balls. He smashed three sixes and a four to get 25 in the 22nd over bowled by Fabian Allen, and that won the team the match.

In the end, he was unbeaten on 52, made off 24 balls thanks to two fours and five sixes. Mahmudullah (19) hit the winning runs courtesy of a four.

Soumya was the team’s top scorer, his 66-run innings was studded with nine fours and three sixes.

Bangladesh had previously been beaten in the six finals they had played in different tournaments.

Incessant rains meant the game was suspended for hours midway through the match and it did break the momentum West Indies openers Sunil Ambris and Shai Hope were having at the beginning.

Put into bat first, the duo had put 131 after 20.1 overs, but rain stopped their charge.

Once the game resumed, Mehidy Hasan Miraz put an end to in-form Hope’s innings. The batsman made 74 off 64 balls thanks to six fours and three sixes.

Ambris was not out on 69 at the end of the 24th over. Mustafizur Rahman was facing a game to forget, conceding 50 in 5 overs, but the batsmen later bailed their star pacer out.

Bangladesh were without key player Shakib Al Hasan, but they still managed to win, which is certain to delight the fans with the World Cup knocking on the door.

The Tigers open their World Cup campaign on 2 June, against South Africa. -ProthomAlo