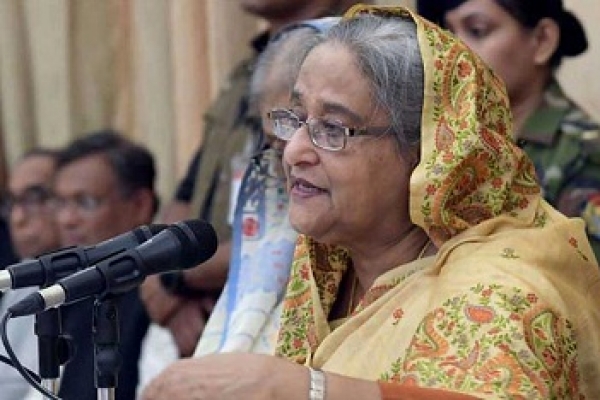 Prime Minister Sheikh Hasina has called for maintaining the people’s confidence and trust in the Awami League in the future through continuation of its welfare activities aimed at changing the fate of the countrymen.

The prime minister was talking to leaders of the Awami League and its associate bodies who went to her Ganobhaban residence in the capital to greet her on her homecoming day.

Sheikh Hasina, the Awami League president, said the last general election is the evidence of her party’s popularity as the people voted for it in large numbers because they had realised that the party had done huge works for the overall development of the country and to change their fate.

“I want our leaders and activists to work in unison to maintain the people’s confidence and trust in the party,” she added.

She asked the party leaders and activists to prepare themselves by acquiring proper knowledge to this end.

On this day (May 17) in 1981, Sheikh Hasina returned home after six years of exile following the country’s saddest history of killing of Bangabandhu along with most of his family inmates on August 15, 1975.

Senior leaders of the party greeted the Prime Minister, also the president of Awami League, by presenting bouquets. Leaders of different front organizations of the party followed them.

The AL has become the number one political party of the country over the years despite facing several ill attempts to destroy the party, the premier said.

“Awami League has been established as an institution in the subcontinent,” she added.

She urged the party leaders to highlight before the people the development projects and programs taken by the government over the years for their welfare.

She also urged the party workers to stay beside the people always and mould public opinion in favour of the party to achieve success. While describing ups and downs of her political journey over the last 38 years, Sheikh Hasina became emotional time and again. She urged the party leaders to choose her successor.

The premier said she becomes emotional when she remembers the gathering of millions of people at the airport to receive her braving heavy rain and storm.

“Love and affection of the people of Bangladesh inspired me to go ahead,” she said.

She said the prime objective of her politics was to return the power to the people from military junta and bring smile on the faces of the masses.

Sheikh Hasina said it was a big challenge for her to take the responsibility of the party despite her active role in student politics.

The prime minister said she returned home at a very difficult time when the killers of Bangabandhu were enjoying indemnity and full liberty. Self-styled president Ziaur Rahman was running the country under night curfew and trying to split the Awami League, she added.

Sheikh Hasina said Ziaur Rahman pushed the county into a situation when 19 coups took place between 1975 and 1982. And, taking the opportunity, Zia killed hundreds of officers in the armed forces, including 561 officers of the air force and 2,000 members of the army.

“Some officers were on leave and knew nothing about the coups. But, Zia picked them from home and killed them by firing squad,” she said.

Sheikh Hasina said Ziaur Rahman was killed due to internal conflict in his party. And, after his killing a blue print of killing many army officers was executed.

The prime minister said Bangladesh is now on the road of prosperity which has been possible for her government’s relentless and sincere efforts to take forward the country to the specific goal.

“Our politics always revolve round the only dream to free the rural people from poverty and provide them with a prosperous life,” she added. _BSS