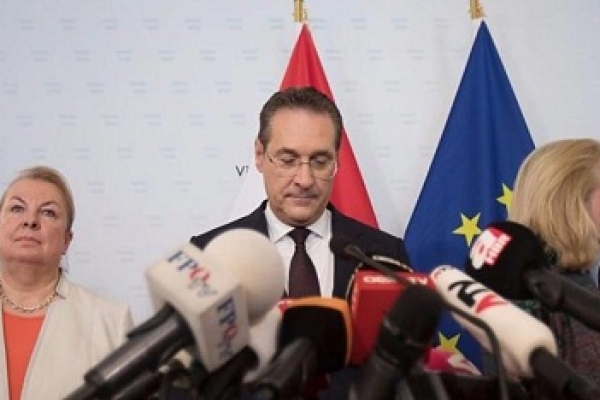 Austrian Chancellor Sebastian Kurz has asked for a snap election after his Vice-Chancellor, Heinz-Christian Strache, resigned over a corruption scandal.

Mr Strache blamed his actions on alcohol and acting like a "teenager", saying his behaviour had been "stupid" and "irresponsible", and that he was leaving to avoid further damage to the government.

"I have suggested to the president of the republic that new elections be carried out, at the earliest possible date," Mr Kurz said.

"After yesterday's video, I must say quite honestly: Enough is enough," he said.

"The serious part of this [video] was the attitude towards abuse of power, towards dealing with taxpayers' money, towards the media in this country," Mr Kurz said, adding that he had been personally insulted in the footage.

He said he had talked about this with Mr Kurz and that they would discuss next steps on Sunday.

A crowd of thousands with placards and banners have been rallying on the square outside Mr Kurz's office, chanting "Snap elections now!"

Mr Kurz has attempted to distance himself from past scandals surrounding the Freedom Party, mostly ones involving party officials and anti-Semitism or racism, but political opponents called for him to respond to the latest revelations.

"This is the tip of the iceberg," Thomas Drozda, from the opposition Social Democrats, told national broadcaster ORF.

"I expect the chancellor, who evidently has known about this video for 48 hours, and that his coalition partner is drowning in a swamp of corruption, to speak and explain his position."

Mr Kurz said that this was not the first time he had had difficulties with the party.

"Even if I didn't express myself publicly at the time, there were many situations that I found difficult to swallow," he said.

The Freedom Party is one of Europe's best-established populist, nationalist parties. But while it is skilled in opposition, frequently gaining over 20% of the vote, its record is much more patchy when it comes to staying in power.