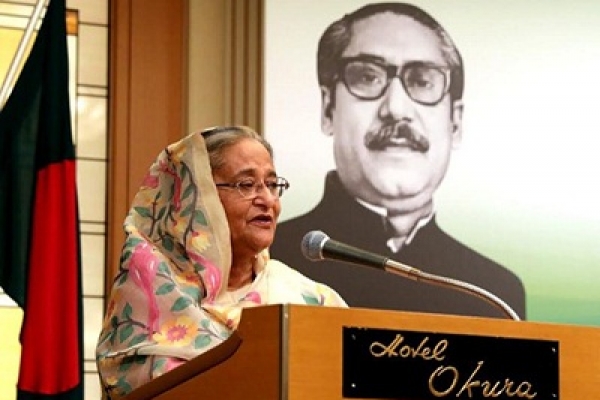 TOKYO, May 28, 2019 (BSS) – Prime Minister Sheikh Hasina today called upon the countrymen not to go abroad illegally risking the lives, rather to go legally taking the opportunities created by the government.

“I personally think, there is no need to go abroad illegally. But many people go abroad for searching better future without knowing their destinations and the nature of the jobs,” she told a community reception accorded to her honour by the expatriate Bangladeshis at a hotel here this evening.

Sheikh Hasina added: “Many people are going abroad by selling their houses and properties at the allurement of the brokers by risking their lives without having proper knowledge whether they will get the jobs or salary for it.”

The premier requested the countrymen to go abroad legally knowing everything properly, saying that registrar your (job seekers) name in the digital centres first and then go abroad, knowing everything from the Ministry of Expatriates Welfare and Overseas Employment.

In this context, she said the government has already set up Expatriates Welfare Bank from where the foreign job seekers can take loan to go abroad legally.

Simultaneously, the government has been taking a number of employment generating projects including setting up 100 economic zones across the country, the premier said.

“We’ve given priority to vocational and technical education along with imparting proper training to youths to build skilled manpower,” she continued.

Due to the initiatives of the government, she said, Bangladesh has become self-reliant in food production and added that Bangladesh is among the top countries in producing food grains, vegetables, fruits and sweet water fishes.

Sheikh Hasina said she has an aim to make people happy with building a prosperous and developed country free from hunger and poverty as dreamt by Father of the Nation Bangabandhu Sheikh Mujibur Rahman.

The premier called upon the expatriate Bangladeshis in Japan to work for the welfare of the country and its people rather to make own fortune. “Find out the markets of Bangladeshi products abroad alongside the initiatives of the embassy to this end.”

Describing Japan as a trusted friend and development partner of Bangladesh, the premier said, “Japan is a very friendly country for us and it helped us a lot to rebuild the war-ravaged country after 1971 Liberation War.”

“Whenever, we come to power, I visit Japan,” she said.

In this context, she recalled the contribution of Japan to building Sonargaon Hotel, Bangabandhu Bridge over Jamuna River and conducting feasibility study of constructing the Padma Bridge.

Terming Japan as the model of development, the premier narrated how Japan became one of the top industrialist countries from an agrarian nation.

Following the ideology of Bangabandhu, she said, Bangladesh is heading towards industrialization alongside giving priority to agriculture.

Highlighting various steps for the welfare of the children, Sheikh Hasina said her government is taking different initiatives so that they [children] can advance, keeping pace with the world.

“We’ve launched Bangabandhu Satellite [into space] and built a Digital Bangladesh…we are providing computer education to the children,” she said.