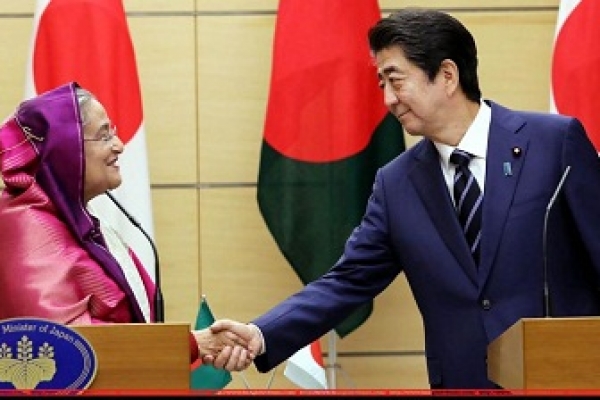 “We agreed to work together to promote deeper cooperation between our two countries,” she told the official dinner hosted by her Japanese counterpart Shinzo Abe at his residence on Wednesday (May 29).
She added that they have identified a number of new areas for collaboration saying, “I am confident those will provide a further impetus to our growing relations.”

She also witnessed the signing of 40th ODA Loan package.
The premier said that Bangladesh always had Japan by its side as a trusted friend and partner in materialising the dream of Father of the Nation Bangabandhu Sheikh Mujibur Rahman.

“In Bangladesh, we are implementing a series of transformational development initiatives to realise the dream of Father of the Nation Bangabandhu Sheikh Mujibur Rahman to build a Sonar Bangla or Golden Bangladesh. We always had Japan by our side as a trusted friend and partner to this end,” she said.

About the bilateral talks that took place earlier at Japanese Prime Minister’s Office, she said that it was marked by deep cordiality, understanding and mutual respect.

The premier said that in the morning she attended a meeting with the CEOs of leading Japanese companies who are doing business in Bangladesh.

She mentioned that she was greatly encouraged to see their clear desire to further expand collaboration and break new grounds. “This aspiration is also shared by our business leaders.”

Sheikh Hasina said that it’s always a pleasure for her to be in Japan.

“Father of the Nation Bangabandhu Sheikh Mujibur Rahman, accompanied by my younger sister and youngest brother had visited Japan in 1973,” she recalled.
“They carried back fond memories of their visit and the love and affection they received from the people of Japan. Since then, every time I visited Japan, I am reminded of that warm feelings and lasting impression Japan made on my beloved father and young siblings,” she continued.

She also mentioned that her childhood, she kept all Japanese dolls, view cards, stamps, calendar, art works etc. in her personal collection as treasures.
“I will keep all the sweet memories and warm friendly behaviour from last visits to this visit at the deep of my heart. I sincerely thank Japan for always being with us.”

She invited Japanese Prime Minister Shinzo Abe and his wife to visit Bangladesh at their convenient time.
Sheikh Rehana, the younger daughter of Father of the Nation Bangabandhu Sheikh Mujibur Rahman, also joined the dinner.