Eid-ul-Fitr being celebrated across the country amid festivity

Eid-ul-Fitr being celebrated across the country amid festivity 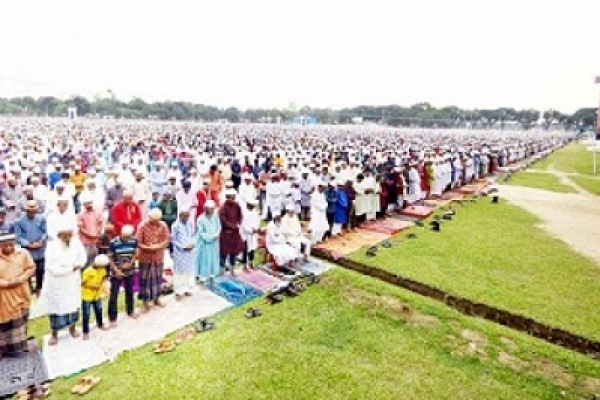 The holy Eid-ul-Fitr, one of the greatest religious festivals of Muslims, is being celebrated today across the country amid due solemnity, fervor and gaiety as the holy Ramadan, the month of fasting and abstinence, came to an end.

The very auspicious occasion began with the sighting of the Shawwal moon last night and reached the climax this morning amid offering the Eid-ul-Fitr prayers by millions from all strata of life at mosques, Eidgahs and makeshift prayer venues in the capital and elsewhere across the country.

A spokesman of the Islamic Foundation confirmed the news last night saying, “The National Moon Sighting Committee took the decision after evaluating data and reports from all the district administrations, offices of Islamic Foundation, Bangladesh Meteorological Department and Space Research and Remote Sensing Organisation.”

During munajats after Eid congregations (jamaats), the Muslims also prayed for divine blessings to help strengthen national unity against all odds and destructive activities, including terrorism and militancy.

Eid-ul-Fitr is Arabic word meaning “festival of breaking of the fast.” The festival marks the end of the Muslim fasting month of Ramadan, the ninth month of the Islamic calendar. Muslims abstain from eating and drinking from dawn to sunset during the holy Ramadan.

On the Eid day morning, Muslims gather at mosques and prayer venues to perform Eid prayers and greet each other. The festival is celebrated by visiting friends and relatives, hosting food parties and sharing sweets. Children not only get new clothes and shoes, but also receive cash gifts called “Salami” from their elders, relatives and well-wishers.

President Abdul Hamid and Prime Minister Sheikh Hasina greeted the countrymen as well as the Muslims across the world on occasion of the holy Eid ul-Fitr.

The country’s main Eid jamaat (congregation) in the capital was held at the National Eidgah on Bangladesh Supreme Court premises at 8.30 in the morning.

President Abdul Hamid offered Eid-ul-Fitr prayers along with hundreds of people from all walks of life at the National Eidgah.

The biggest Eid congregation of the country on Sholakia Eidgah Maidan in Kishoreganj was held at 10 this morning.

Bangladesh Railway is operating Solakia special trains on Bhoirab-Kishoreganj Bhoirab and Mymensingh-Kishoreganj-Mymensingh routes on the day for carrying passengers to and from the Sholakia Eidgah Maidan.

Intensified security measures have been taken marking the Eid across the country.

The government has chalked out elaborate programmes to celebrate the holy Eid-ul-Fitr.

The national flag has been hoisted at government, semi-government, autonomous and non-government offices and other important establishments.

Important traffic islands and light posts in Dhaka city have also been decorated with miniature national flags and flags inscribed with “Eid Mubarak”.

Besides, designated government offices and other establishments have been illuminated marking the day of Eid-ul-Fitr.

Bangladesh Television, Bangladesh Betar and all other private television channels are airing special programmes highlighting significant of the event.

Improved diets are being served in hospitals, jails, orphanages, safe homes, drug addicts’ treatment centres and other shelter houses all over the country on the day.

The day is also being celebrated in Bangladesh missions abroad amid festivity.

A total of 568 Eid congregations was held in the capital under two city corporations.

Two Eid congregations were held at the Dhaka University central mosque  Masjidul Jamia. The first congregation was held at 8 am and the second one at 9 am.

The Eid congregation was also held at 8 am at the south plaza of the Jatiya Sangsad Bhaban.

The chief whip and whips of the Jatiya Sangsad, members of the cabinet, lawmakers and employees of the parliament secretariat took part in the Eid congregation along with the local people.