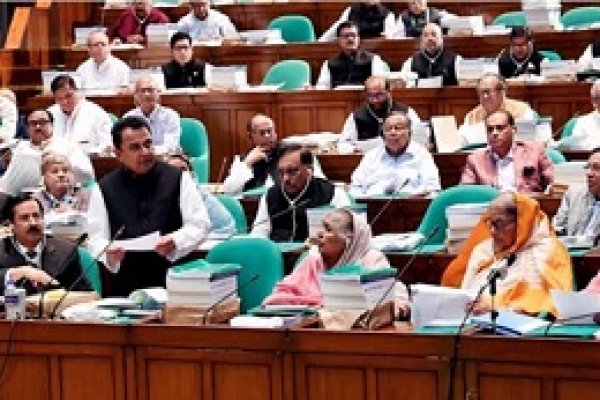 Finance Minister AHM Mustafa Kamal today placed a Taka 5,23,190 crore national budget for FY20 in parliament to ‘make a big stride’ to materialize the Vision 2021 and implement the agenda for 2030.

“We are committed to the nation to realize fully the Vision 2021 and implement the agenda for 2030 for building a happy and prosperous future for the nation, and thus materialize the Father of the Nation’s cherished dream of establishing Sonar Bangla (Golden Bengal), which is the fundamental premise of our current election manifesto too,” Kamal said.

The Finance Minister unfolded the 128-page budget with the title ‘Bangladesh on a Pathway to Prosperity: Time is Ours, Time for Bangladesh’ from 3:07 pm. This was the country’s 48th national budget and 20th by the Awami League government in its five terms since the 1971 independence.

As the Finance Minister was feeling unwell, Prime Minister Sheikh Hasina took over the task of presenting the remainder of the budget speech in the House.

Dedicating this national budget for FY20 to Father of the Nation Bangabandhu Sheikh Mujibur Rahman, Kamal proposed to implement the new VAT law, a number of welfare oriented initiatives and reforms in the banking sector, capital market, savings certificates and social safety net programmes, generate employments and enrollment of educational institutions under the MPO system.

The size of the budget is Taka 58,617 crore more than that of the last fiscal presented by his predecessor Abul Maal Abdul Muhith.

Muhith last year presented a Taka 4,64,573 crore budget before he went on retirement by serving as the first finance minister to unfold the budget for the 10 times in a row since 2009.

“As a sequel of the Vision 2021, the present government brings before the nation a new Perspective Plan ‘Vision 2041’. We are determined to elevate Bangladesh from the status of a middle income country, and become a peaceful, happy and prosperous developed country by 2041,” Kamal said.

Regarding the implementation of the long-awaited Value Added Tax Act, 2012 from the coming fiscal year (2019-20), Kamal said the government would provide all types of logistical support including necessary manpower in this regard.

Further, a Joint Working Group will be constituted comprising officials from the government and the private sector, which will oversee the implementation of the law.

Highlighting the details of budget structure, Kamal said depending on various planned tax management steps, total revenue collection has been estimated to be Taka 3,77,810 crore in the FY2019-20. “Out of this, Taka 3,25,660 crore will be collected through the National Board of Revenue. Tax revenue from non-NBR sources have been estimated at Taka 14,500 crore. Besides, non-tax revenue is estimated at Taka 37,710 crore.”

The overall budget deficit has been estimated at Taka 1,45,380 crore, which is 5.0 percent of GDP. “It is to be noted that we had the same ratio last year. In financing the deficit, Taka 68,016 crore will come from external sources and Taka 77,363 crore from domestic sources,” he said.

Kamal said amongst the financing from domestic sources, Taka 47,364 crore will come from the banking system and Taka 30,000 crore from savings certificates and other non-bank sources.

The Finance Minister in his budget speech said the government is aiming to achieve the double digit growth as quickly as possible through timely implementation of all nationally important infrastructure projects including mega projects.

He said the government would need a huge amount of financial resources till 2030 to implement SDGs where the role of the private sector, in addition to the government, will be crucial to meet this resource gap.

To revitalize the stock market, he said special incentives would continue for encouraging investment in the capital market.

In order to save the farmers from the financial loss caused by this, a pilot project for ‘crop insurance’ will be introduced. In addition, insurance of properties generated from large projects will be covered by the local insurance companies.

“As per our Election Manifesto, 2018,” he said, “the budget allocation in the social safety net sector will be doubled in the next five years.” The government has allocated Taka 74,367 crore in the sector, which is 14.21 percent of total budget and 2.58 percent of GDP in FY2019-20.

Since the government pensioners are only a small fraction of the total population in the country, a ‘Universal Pension Authority’ will be formed soon for gradual introduction of the universal pension for everyone including all employed in formal and informal sectors of the economy, the finance minister said.

About the tax-free income tax ceiling, he said the criteria for keeping the threshold unchanged for the last few years have remained the same this year as well.

“InshaAllah, as part of the ongoing process, efforts to bring the remaining citizens under the tax net will continue,” he added.

Kamal said the government would establish revenue offices in every Upazila and Growth Center in the country and those would have necessary manpower and other logistics to facilitate revenue collection.

“I would like to inform the august House that we have not included any component in the budget of FY2019-20 that may cause a price spiral for essential commodities,” he added.-BSS