PM seeks help from all for budget implementation

PM seeks help from all for budget implementation 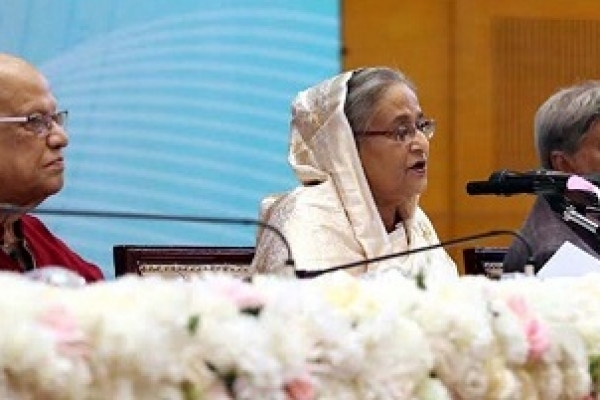 Prime Minister Sheikh Hasina today described the budget for FY 2019-2020 as public welfare-oriented, seeking cooperation of all to implement it properly for turning Bangladesh into a developed and prosperous country.

“You all should work with sincerity for proper execution of the budget to achieve the cherished goal,” she told a post-budget press conference at Bangabandhu International Conference Centre (BICC) here this afternoon.

The Prime Minister briefed the media about the proposed budget for FY 2019-2020 and responded to questions for the first time in the history of the country as Finance Minister AHM Mustafa Kamal was sick.

On Thursday, in an unprecedented move, Sheikh Hasina also read out parts of the budget speech on behalf of the finance minister who felt unwell while unveiling it in parliament.

The premier said she wanted Bangladesh to go ahead as it is heading towards development in all sectors at an indomitable pace to establish Bangladesh as a ‘Sonar Bangla’ as dreamt by Father of the Nation Bangabandhu Sheikh Mujibur Rahman.

“Bangabandhu made Bangladesh independent. It has earned honour from the entire world as a role model for development. We want Bangladesh to step forward maintaining the dignity,” she said.

Taking a swipe at some research organizations for their comments about budget, the prime minister said there are some people who do not feel happy about anything. “Whatever good work you did, they do not see anything good in it,” she said.

Sheikh Hasina said when democracy prevails in the country and the people and the country witness economic development, some people do not see anything good and “they search for ‘kintu’ (but) in everything.”

The premier said, “I don’t know what research they are carrying out and what they bring for the country, but they have to say something… it’s a symptom of sickness.”

In this connection, Sheikh Hasina further said: “What matters to me is whether the general people are happy or not for the development, whether we can do anything good for them.”

The prime minister said the present government placed budget for 11 consecutive times. “The country witnessed tremendous development during the period and the people are getting its benefit,” she said.

The prime minister said the aim of the government is to free the country from poverty and to make Bangladesh a developed and prosperous country.

“We are working untiringly and have already achieved success in this regard,” she said.

Sheikh Hasina said: “In the past when Bangladeshis went to any country of the world, the people of that country would have thought of Bangladeshis as a nation of beggars.”

“But they (foreigners) don’t have such a perception about us anymore and it’s our great achievement,” she said.

Replying to a question, the Prime Minister said the scope of whitening the black money was given mainly to stop siphoning off the money and allowing investment of the money.

“We are giving scope to invest the (black) money to stop it from being smuggled out of the country. Not only we, but also the previous governments gave the scope,” she said.

The black money can be invested in the 100 economic zones and high-tech parks which are being set up, she said, adding that the scope has been given after taking a specific interest.

One can invest the (black) money after giving additional 10 percent interest, she continued, adding that the scope was also given so they (black money holders) can pay their bank loans.

The Anti-Corruption Commission (ACC), Bangladesh Bank and international agencies are on hot pursuit to capture the siphoning off the money, she informed.

The premier, however, said there is no scope for the honest people to be discouraged with giving the scope of whitening the black money, saying, “I have to give many tough tests for honesty. But I have never been frustrated as honesty has a power and I have the power always in me.”

If they fail to avail the scope, action will be taken against them, she said.

The amount of bank loan defaults was shown bigger as it is counted with the cycling order of interest, she said, adding that the amount of the actual loan is smaller.

Describing high interest rate as one of the reasons for bank loan default, she said, “I have given the private banks many advantages to bring down the interest rate against loan to single digit. But, they were yet to materialize it.”

Tough directives have been given to reduce the bank loan interest to single digit to attract investment and initiatives have been taken to amend several related laws, she said.

Is it possible to give jobs to 16 crore people?, she questioned.

Besides, 100 economic zones are being built across the country which will create employment for one crore people, she mentioned.

Nowadays, people are now facing scarcity of labourers for cutting paddy even after offering Tk 500 and feeds two meals each daily as employment has already been generated, she opined.

Highlighting various measures for the development of the northern region, she said that the word ‘Monga’ had not been heard in the last 10 years due to the huge development works carried out in the region.

“I have set up Uttara EPZ in the region and restarted Syedpur Airport and land port in the area for the development of the region,” she said, adding that border huts are now being operated in the region.

In this context, the premier said that she knew well about the region as she visited almost all the areas of the northern region.

The premier said the government has already prepared the list of the schools for bringing those under the Monthly Payment Order (MPO) scheme and allocation has been announced in this regard in the proposed budget.

Responding to a question, the prime minister said it is a responsibility of the government to look into the good and bad of the farmers.

“Bangladesh has become self-reliant in food as the government is continuing to look into the good and bad of the farmers,” she said.

Sheikh Hasina said the government has taken a decision to purchase 4 lakh metric tons of paddy this season to ensure its fair price for the farmers.

The premier said the government is giving huge incentives to the farmers to produce paddy. “The peasants have to spend less amount of money for producing paddy, as the government provides more money
in this regard,” she said.

“We’re extending all kinds of support to the farmers and as a result, the country witnessed huge paddy production,” she said.

Explaining about “Sonali Juddho” (golden war) which the planning minister mentioned in his budget speech, Sheikh Hasina said the goal of her government is to build a hunger and poverty-free Sonar Bangla.

“We’re working tirelessly to make the country prosperous economically, and our ‘Sonali Juddho’ means the people can see the golden days,” she said.

Earlier in her written speech, the prime minister said the Awami League placed the election manifesto before the people in the last general election with a vow to build a happy, prosperous and developed Bangladesh.

“To implement the manifesto which was hugely accepted by the people as well as to attain the sustainable development goals (SDGs) and seventh five-year plan, this year’s budget has been prepared,” she said.

Terming the budget as the biggest one in the country’s history, Sheikh Hasina highlighted salient features of the budget.