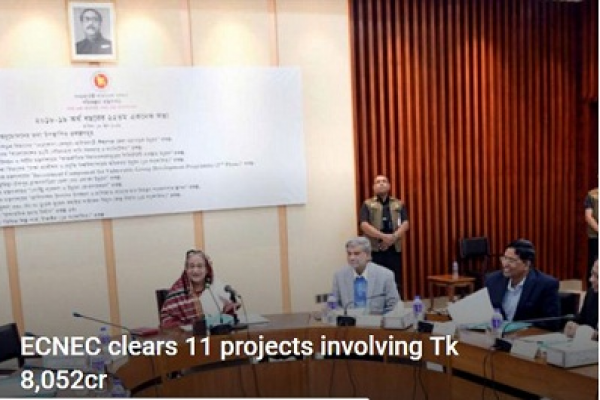 The Executive Committee of the National Economic Council (ECNEC) today approved 11 development projects with an outlay of Taka 8,052 crore, including one for water supply and sanitation.

The Department of Public Health Engineering (DPHE) is entrusted with implementing the water supply and sanitation project for 30 Pourasabhas involving Taka 1,751 crore by June, 2023.

The approval came at the weekly meeting of the ECNCE held at NEC Conference Room in city’s Sher-e-Banglanagar with ECNEC Chairperson and Prime Minister Sheikh Hasina in the chair.

Briefing newsmen after the meeting, Planning Minister M A Mannan said that of the total project cost of Taka of 8,052 crore, the government would provide Taka 3,388 crore from the national exchequer.

He said the organizations concerned would contribute Taka 550 crore from own fund while the remaining Taka 4,113 crore would come as project assistance.

The Prime Minister has directed the authorities concerned to implement the projects without any delay, he said.

Planning Division Secretary Nurul Amin said the Prime Minister has given directives to extend the water supply and sanitation services to the Union Parishad level alongside the Pourasabha. She also ordered the officials concerned to calculate the cost for it, he added.

Nurul Amin also told newsmen the Prime Minister has asked the concerned department to construct restroom during the construction of highways. Roads and Highways Department would decide where the restroom would be constructed, he added.

At the ECNEC meeting, the Prime Minister congratulated Bangladesh Cricket Team and greeted the countrymen for the win against West Indies in the Cricket World Cup.