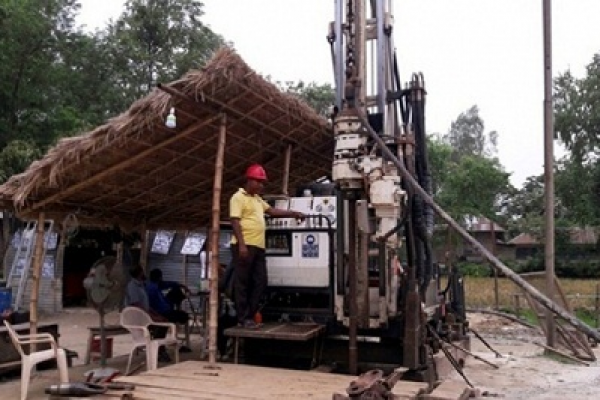 Geological Survey of Bangladesh (GSB) has announced they discovered the country’s first magnetic mine or iron ore at Hakimpur upazila of Dinajpur.

“A 400-foot thick iron layer has been discovered at a depth of 1,330 feet and the layer stretches over an area of 6-10 square kilometers,” GSB’s Deputy Director Mohammad Masum said making the groundbreaking announcement at a press conference in the northwestern district on Tuesday.

He added, “The discovery of iron mine is first in Bangladesh.”

Masum said the deposit was found at Isabpur village in Hakimpur while the ore contained higher iron contents compared to most other such mines across the globe.

He said the percentage of iron in the mine is 60 while that in most other mines elsewhere in the world it is below 50.

The geologist said the Hakimpur mine also appeared to be a source of copper, nickel and chromium and limestone at a depth of 1150 feet.

Geology literatures suggest the typical grade of iron at which a magnetite-bearing banded iron formation becomes economic is roughly 25 percent.

Masum said the GSB detected the existence of mineral substances while drilling a well at Mushidpur, about 3 kilometers east off Isabpur village, in 2013 and six years later they started digging at Isabpur village on April 19.

“As we drilled 1380-1750 feet beneath the surface we saw a ray of hope and (eventually) making the (initial) announcement,” he said.

GSB Director General Zillur Rahman Chowdhury was not available for comments immediately as he is on a tour abroad but officials said along with senior officials he visited the site on May 26.

The GSB started drilling well after taking 50 decimals of land on lease for four months at Tk 45,000 from farmer Ishaque Ali of Isabpur village, 11 kilometers off the upazila headquartersr.

“We started drilling a well on April 19 last and a 30-member team of experts conducted the drilling work in three shifts,” said another GSB Deputy Director M Masud Rana at the press conference.