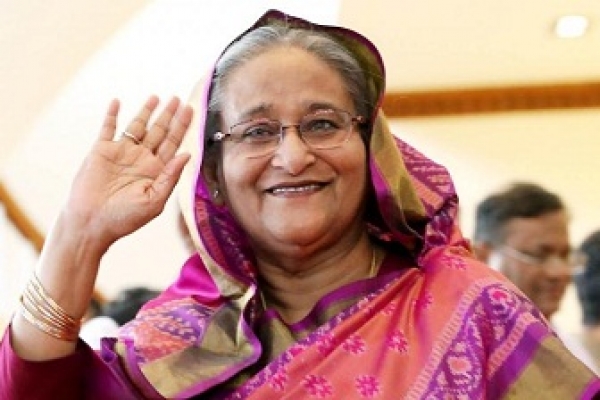 A red carpet was rolled out as the prime minister arrived at the airport.

Chinese Vice Foreign Minister Qing Gang received the premier and a tiny-tot presented a bouquet of flowers to her while a smartly turned out contingent of the Chinese armed forces gave her a static guard of honour at that time.

After the reception at the airport, the prime minister in a ceremonial motorcade was taken to Diaoyutai State Guest House, where she will be staying during her visit to the Chinese capital.

Earlier at 10.05 in the morning (BdST), the prime minister departed from the Dalian Zhoushuizi International Airport for Beijing.

Vice Mayor of the Dalian City Xiao Shengfeng saw the premier off at the airport in Dalian.

Earlier on Jul 1, the premier left Dhaka for the city of Dalian, Liaoning Province on a 5-day bilateral official visit to China at the invitation of her Chinese counterpart Li Keqiang and reached the city at 12.15am local time the next day (Jul 2).

During her stay in Dalian, the prime minister attended the “WEF (World Economic Forum) Annual Meeting of the New Champions 2019”, also known as WEF Summer Davos and met Founder and Executive Chairman of WEF Klaus Schwab at his office and joined a panel discussion on “Cooperation in the Pacific Rim” on Jul 2.

The prime minister is scheduled to give an interview to the CGTN Channel, a Chinese international English-language news channel of the State-owned China Global Television Network group, part of the China Central Television, based in Beijing, and join a community reception followed by a dinner at Legendale Hotel Wangfujing, Beijing on Jul 3.

The Bangladesh premier, during her stay in Beijing, will also hold bilateral talks with Chinese Premier Li Keqiang on Jul 4 and President Xi Jinping on Jul 5.

On Jul 4, Sheikh Hasina will join the welcoming ceremony and place wreaths at the heroes memorial at the Great Hall of the People in the morning.

Later, she will hold bilateral talks with Chinese Premier Li Keqiang and attend the agreement signing ceremony at the Great Hall of the People.

The prime minister will also join a banquet to be hosted by the Chinese premier in Beijing.

Sheikh Hasina will attend a business roundtable with Chinese business leaders at CCPIT in the afternoon the same day.

On Jul 5, the prime minister is scheduled to deliver a speech at an event organized by a Chinese think tank named “Pangoal Institution” in the morning.

The CEOs of Chinese companies are expected to call on Sheikh Hasina at her place of residence and a meeting will also be held between Bangladesh premier Sheikh Hasina and Chairman of NPC Li Zhangshu the same day at the Great Hall of the People.

The prime minister will hold a meeting with Chinese President Xi Jinping at Diaoyutai State Guest House on Jul 5.

She will also join a banquet to be hosted by the Chinese president at the same place.

“The Rohingya issue will come up as a major topic during our Prime Minister’s visit … we do believe, after that, Beijing will take a ‘proactive role’ in resolving the crisis (Rohingya repatriation),” he told a press briefing at his ministry in Dhaka.