My only job to give people a better life: PM

My only job to give people a better life: PM 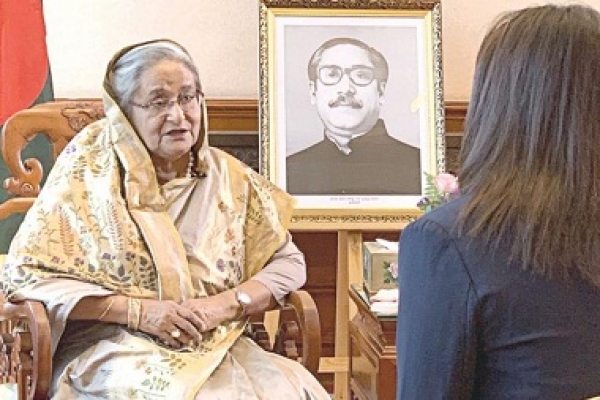 Prime Minister Sheikh Hasina said her only job is to make Bangladesh a sustainable country and give its people a better life.

“I lost all my family members except my sister, but the people are really my family, and they are the closest to me. I think I have only one job, to give my people a better life. A poverty-free hunger-free prosperous life,” she told CGTN reporter Liu Yang in an interview in Beijing on Jul 3.
“My goal is to make Bangladesh a sustainable country to realise the Golden Bangladesh dream of my father,” she said.

When the reporter asked the prime minister, “You are very popular in Bangladesh and you are a powerful woman,” Sheikh Hasina answered in the most humble way.
“Well, I feel that I have to serve my people, but of course, our people love me,” she said.

The premier said: “Every time I was trying to think of what my father did, I read his diary. That was my inspiration. My father always thought about the people, because our people were so poor. Over 90 percent of people were living in poverty, and my father devoted himself for the cause of those people.”
She added: “He knew how people were suffering. From our childhood, he always told us of the suffering of our people, and how he wanted to give them a better life. We learned from him to love the country, and to love the people and the responsibility [that comes with it].”

Sheikh Hasina said Bangabandhu also told her to work for the people and to sacrifice herself to the people. “When you can do something and people are satisfied, it’s really important. China has definitely shown the way, I am really happy to be here, I congratulate the Chinese people.”
Important parts of the interview follow:

LIU YANG: “This is your first visit to China since your re-election, what do you expect from this trip?”
PM: “Actually I was thinking to visit China, during my first tenure in 1996, when I became the prime minister, my first official visit was in China, you know we and China have a good relationship. My father visited China in 1952, and in 1957 again, so now I am here, and I am very happy. China is our friendly country, and I thank to the prime minister invited me giving me this chance.”
LIU YANG: “We know China is investing heavily in Bangladeshi infrastructure. Apart from infrastructure, what other fields could see more cooperation between China and Bangladesh, especially under the Belt and Road framework?”
PM: “I always think the importance of connectivity, connectivity with all of our neighbouring country. China is really collaborating with us, many Chinese companies are constructing many of our important projects. As you know that we have signed the agreement- Bangladesh-China-India-Myanmar Economic Corridor that will open the door to increase our trade, business, communication, and also develop our communication for trans-Asian highway and railway.”
LIU YANG: “How do you evaluate China’s development in the past 70 years? What do you think China’s achievements mean to Asia and the rest of the world?”
PM: “One neighbour is developed, other neighbour is also receiving the fruit of it. My neighbour is developing so much, we can learn from them and also we can work together. Frankly speaking, when China was reborn 70 years ago, you cannot imagine what was the situation that time, but within the short period of time, the way China developed, now China become the 2nd largest economy in the world, so you must be proud of it.”
LIU YANG: “What would you say was the most important lessons that you learned from the previous leader- Bangabandhu Sheikh Mujibur Rahman. And how has that kind of thinking inspired you to move forward on the road to political success?”

PM: “My father who devoted himself for the cause of those people. We learn from him to love the country, and to love the people and the responsibility. From 2009 to 2019, now you can see the Bangladesh within 10 years, we changed. So definitely China has shown us the way China developed. So I congratulate again for that achievement.”