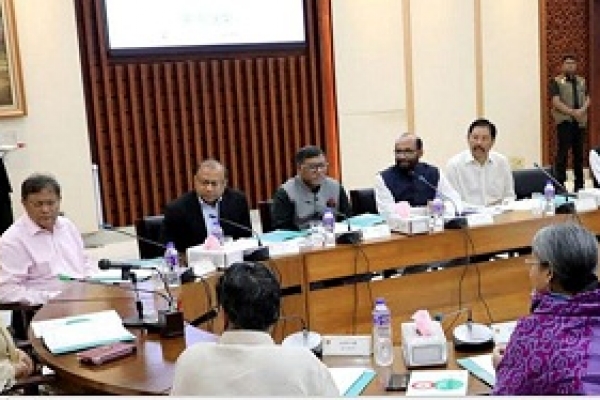 The Executive Committee of the National Economic Council (ECNEC) today approved eight projects involving Taka 5,142.06 crore including the one to widen and strengthen important upazila and union roads in Dhaka Division worth Taka 2,606 crore.

The approval came from the 2nd ECNEC meeting of the current fiscal year (FY20) with ECNEC Chairperson and Prime Minister Sheikh Hasina in the chair held at the NEC Conference Room in city’s Sher-e-Bangla Nagar area.

Briefing the reporters after the meeting, Planning Secretary Muhammad Nurul Amin said a total of eight projects were approved with an overall estimated cost of Taka 5,142.06 crore.

“Of the total project cost, Taka 4,129.81 crore will come from the Government of Bangladesh portion and the rest of Taka 1,012.55 crore from project assistance,” he said.

Of the approved eight projects, six are new while the rest of two are revised projects.

According to the Planning Commission officials, the Local Government Division will implement the widening and strengthening of upazila and union roads project in Dhaka Division by June 2024.

The project will be implemented at 67 upazilas in 13 districts of Dhaka Division.

The main objectives of the project are constructing rural road
infrastructures to facilitate expansion of growing rural economy and growth, creating improved and strong rural road network to give modern civic facilities to the rural community and subsequently create employments.

The main project operations include some 1001.51 kilometers road and 240 intersections development and construction of 5,857 meters of bridges and culverts as well as 30 kilometers drain and some 12,000 square meter of slope protection.

The Planning Secretary said Prime Minister Sheikh Hasina in the meeting issued a set of directives to the authorities concerned including to frame a ‘master plan’ by the Cox’s Bazar Development Authority before undertaking any development project there.

She also underscored the need for creating more ‘jhao bon’ in the coastal areas of Cox’s Bazar to protect the tourist town from natural calamity.

The Premier also directed the Deputy Commissioner of Cox’s Bazar to frame a ‘master plan’ so that buildings and other infrastructures are not mushroomed here and there in Cox’s Bazar.

Referring to the approval of the construction of supporting infrastructures for the Bangabandhu Hi-Tech City-2 Project with Taka 344.93 crore, the Prime Minister directed the authorities concerned to incorporate sports and entertainment facilities as well as shopping mall inside the city.

The Planning Secretary said a project on constructing six stadiums in selected upazilas placed by the ministry of Youth and Sports was withdrawn from the meeting since mini stadiums are being constructed at upazila level across the country.

In this connection, Sheikh Hasina directed the authorities concerned to construct such stadiums at open space in upazila-level and not on the lands of schools and colleges. She said these stadiums would have galleries at one end while the three other ends would remain open.

The Prime Minister also asked the ministry of Railways not to launch Diesel Electric Multiple Unit (DEMU) trains rather introducing rail other rail communication from Dhaka to Bangabandhu Hi-Tech Park.

In this connection, she suggested for introducing a separate direct train from Dhaka to the Hi-Tech Park at Kaliakoir.