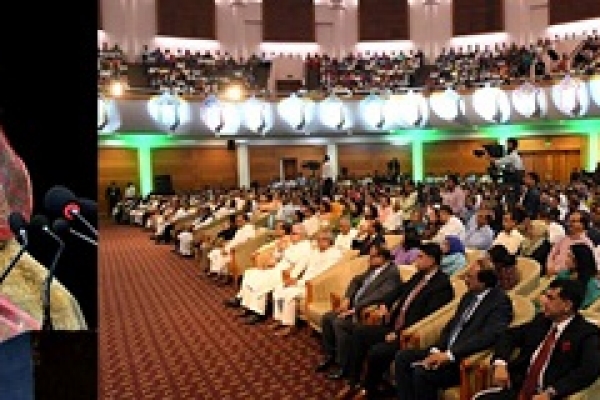 Prime Minister Sheikh Hasina today reiterated her firm stance against corruption, terrorism, militancy and drug abuse, saying that the drives against these social menaces will have to continue to maintain peace and security in the country.

“We want to free the country from graft, terrorism and militancy and we want to ensure peace and security in the life of the people … we will adopt all work plans in this way,” she said.

The premier added: “So we’ll have to continue the drives against corruption, terrorism, militancy and drug abuse.”

The prime minister was addressing the Annual Conference of Bangladesh Administration Service Association (BASA) as the chief guest at Bangabandhu International Conference Centre in the capital this evening.

State Minister for Public Administration Farhad Hossain was present at the function as the special guest, while Cabinet Secretary Muhammad Shafiul Alam spoke.

A documentary on the activities of the association was screened at the function. Ministers, PM’s advisers, parliament members, senior officials and BASA members were present at the function.

Seeking cooperation of the officials of the administration to establish a poverty-free Bangladesh, the prime minister said her government wants the people to be freed from the curse of poverty and they will get a better life.

“We’ve brought down the poverty rate to 21 percent and we want to cut the rate further … we want to reduce the poverty rate by at least one percent from those who had said that Bangladesh will be turned into a bottomless basket after independence,” she said.

The premier continued: “This is my word … we want to show that we can.”

Sheikh Hasina said: “We are victorious nation as we triumphed victory in the liberation war. Like that we’ve to prove that we could build a poverty-free Bangladesh and for this we seek cooperation from you.”

The prime minister asked the public servants to undertake new programmes through their merit and innovative power.

“You’ve to undertake development plans in a planned way … you’ve to think about new programmes and we want you will work in that way,” she said.

Sheikh Hasina said the country has resource constraints. “But despite the resource limitations, the country could be developed, we’ve proved it,” she said.

The prime minister said her government has increased budget eight times. “This year, we’ve placed the highest budget in the country’s history,” she said.

“We had a target of placing a budget of Tk five lakh crore and raising the GDP to eight percent and we attained this goal,” she said.

Sheikh Hasina said the Father of the Nation raised the GDP growth to seven percent and graduated Bangladesh to a least developed country within only three and half years after starting journey from zero.

“But all his achievements were destroyed after 1975,” she said.

The prime minister said her government is working untiringly not only for materialising Bangabandhu’s dream by attaining high GDP growth, also for giving a beautiful life to the people and establishing a hunger-and-poverty-free Bangladesh.

“To achieve the goal, we’ve to continue our drives against corruption, terrorism, militancy and drug abuse,” she said.

Elaborating her government’s steps for the welfare of the government employees, Sheikh Hasina said: “It’s our responsibility to create an environment conducive to the work.”

“We’ve tried our best so that your living standard improves and you can run your family beautifully,” she said.

Sheikh Hasina said countries development is now visible as her government stays in power continuously since 2009 and the people of the country are started getting its benefit.

“You have special contributions to attaining this development and for this I extend my sincere thanks to all,” she said.