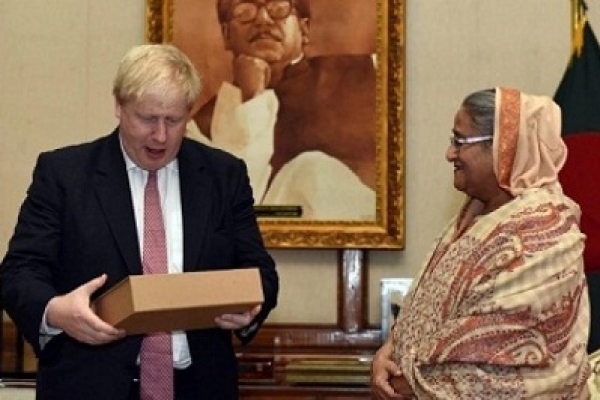 Prime Minister Sheikh Hasina, now in London on an official visit, has sent Bangladesh’s famous mangoes along with flowers to

newly appointed British Prime Minister Boris Johnson as a mark of her good wishes for Johnson.

“The honourable prime minister sent Rajshahi Fazli, the king of mango, along with flowers to Boris Johnson after his assumption of office as the prime minister of the United Kingdom on Thursday,” PM’s Press Secretary Ihsanul Karim told BSS over phone on Friday night from London.

He said two officials of Bangladesh High Commission in London handed over the delicious mangoes and flowers to the officials concerned at 10 Downing Street, the official residence and the office of the British Prime Minister, in London on Thursday morning local time.

The press secretary said the officials of the 10 Downing Street cordially received the gifts of the Bangladesh prime minister and said that they would reach the items to Boris Johnson.

Sheikh Hasina reached London on July 19 to attend Bangladeshi envoys’ conference and other programmes. The prime minister underwent a successful surgery in her left eye at a London hospital on July 22.