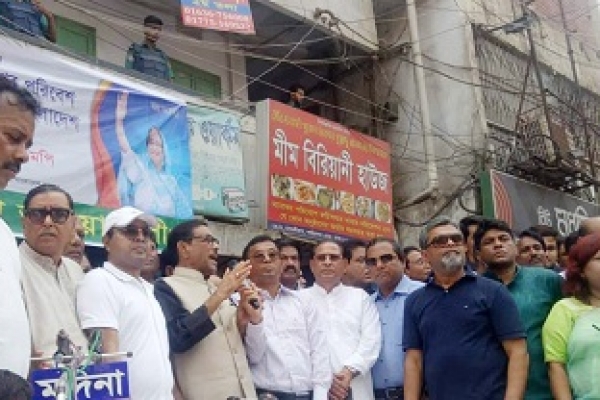 “As per the instruction of Prime Minister Sheikh Hasina, we will continue our cleanliness drive until the deadly Aedes mosquito is controlled or every person of the country could be made free from dengue,” he said while addressing the inaugural session of a dengue prevention programme, arranged by Dhaka South City unit of AL, in the city’s Shantinagar area.

Speaking as the chief guest, Quader urged all to work together to address the dengue situation in the country, saying the premises of every homestead must be cleaned up to prevent aedes mosquito and that is why all should cooperate with the government to this end.

Calling upon the both Dhaka north and Dhaka south city corporations, the Health Ministry and the Local Government Ministry to work together to eliminate aedes mosquitoes, Quader, also AL general secretary, said they should not make indiscriminate remarks on dengue issue, which may create panic among general people.

A vested quarter is creating panic among people over dengue fever to stop holidaymakers from going home ahead of Eid-ul-Azha, the AL general secretary said, adding “You should go to your homes to celebrate Eid with your dears and nears. But, you must stay alert to dengue and rumours as well”.

Quader said a political evil force gets active here in every August, the month of mourning when Father of the Nation Bangabandhu Sheikh Mujibur Rahman along with most of his family members was killed on August 15 in 1975.

All the AL leaders and activists must remain alert against the force to combat it together, he added.

August is the month of mourning, but we are busy with dengue and aedes mosquito, the road transport and bridges minister said, adding the evil force is stronger than the aedes mosquito.