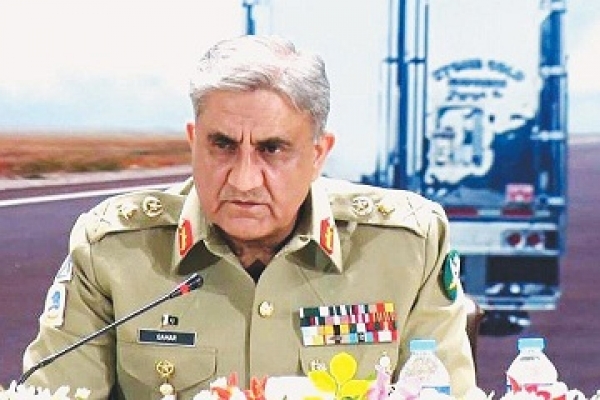 Pakistan's military will "go to any extent" to support people in Kashmir, its army chief said on Tuesday, as India kept up a telecoms blackout for a second day to deter protests over its scrapping of special status for the region.

In a move to tighten its grip on the Himalayan region also claimed by Pakistan, India dropped a constitutional provision that allowed the country's only Muslim-majority region to make its own laws.

After a meeting with top commanders in the city of Rawalpindi, Pakistan's army chief expressed support for the people of Kashmir, and the prime minister said he was weighing an approach to the United Nations Security Council.

"The Pakistan Army firmly stands by the Kashmiris in their just struggle to the very end," said General Qamar Javed Bajwa. "We are prepared and shall go to any extent to fulfil our obligations in this regard."

The nuclear-armed neighbours have fought two of their three wars over the territory, and engaged in an aerial clash in February after a militant group based in Pakistan claimed responsibility for an attack on an Indian military convoy.

Video images by Reuters partner ANI showed deserted streets on Tuesday in Srinagar, the main city of the region at the heart of a nearly 30-year armed revolt India accuses Pakistan of helping.

In response, Islamabad says it only gives moral and diplomatic support to the Kashmiri people in their struggle for self-determination.

"We will fight it at every forum. We're thinking how we can take it to International Court (of Justice)... to the United Nations Security Council," Prime Minister Imran Khan told Pakistan's parliament.

Hours before Monday's news, Indian authorities had clamped an unprecedented communications blackout on Kashmir, arresting its leaders, including two former state chief ministers.
Although the leaders had warned that the change, which frees up land for purchase by non-residents, would provoke unrest, the blackout and a heavy deployment of troops, including tens of thousands of additional soldiers, have helped curb agitation.

A backlash against New Delhi's decision to tighten control over the region was imminent, however, since many saw the move as a breach of trust, said Shah Faesal, the leader of the Jammu and Kashmir People's Movement.

"We might see an eruption when the guard is down," he told Reuters. "People are taking it as an act of humiliation."

Kashmir's regional politicians said they were kept in the dark about the move and feared a wider crackdown. Three leaders Reuters met on Monday at their homes in Srinagar had little knowledge of the situation outside.

"This will be difficult - difficult for people, difficult for political parties," said Rafi Ahmed Mir, spokesman of the People's Democratic Party, which was part of the BJP coalition that ruled the state until last year.

DIVIDED FAMILIES
Armed police on Tuesday patrolled every few hundred metres in Srinagar, where a ban on public gatherings of more than four people stayed in force. Educational institutions and most shops in residential neighbourhoods were shut.

Some shopkeepers said stocks were running out after days of panic buying.

"No provisions are left in my shop, and no fresh supplies are coming," said grocery store owner Jehangir Ahmad.

At a Srinagar hospital hit by the crackdown on telephone, television and internet communications, staff were working overtime, with ambulances sent to bring in doctors and nurses.

"We are managing for now," said a senior official at the 500-bed Lal Ded hospital who sought anonymity as he was not authorised to speak to media.

Security forces fired tear gas and pellets to disperse sporadic protests on Monday, said one police official who declined to be identified.

"There was stone-pelting in some parts of the city," he added.

In Muzaffarabad, the capital of Pakistan-governed Kashmir about 45 km (28 miles) from the neighbours' contested border, protests entered a second day, with hundreds of people, including children, shouting anti-India slogans.

In the nearby Neelum Valley, where the two sides have exchanged heavy shelling in recent weeks, all shops and businesses shut in protest.

Many Kashmiris have relatives on both sides of the border, but those on the Pakistani side say they have been unable to reach people in India for days.

Tanveer-ul-Islam, who migrated to Muzaffarabad in 1990, said he had lost touch with his mother in Indian Kashmir since Sunday.

"You can’t even imagine my pain," he added. "We do not know about the well-being of anyone across the divide."

In Dhaka, the capital of neighbouring Bangladesh, hundreds of people protested outside the national mosque after noon prayers, chanting slogans such as "Go to hell, Hindustan. Go to hell, the Modi government. May Kashmir be free."-Reuters